Sissy's button claw finally came off today on the bed! I hope she grows another round one! 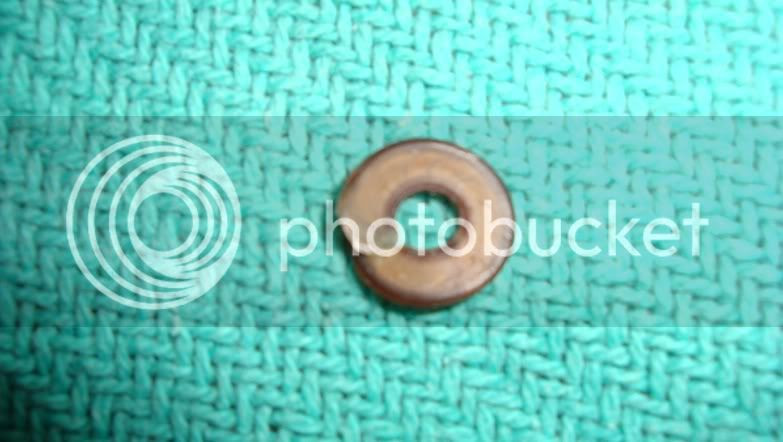 The kittehs are all making funny faces because I caught them just as they were cleaning themselves up after a tasty canned dinner. 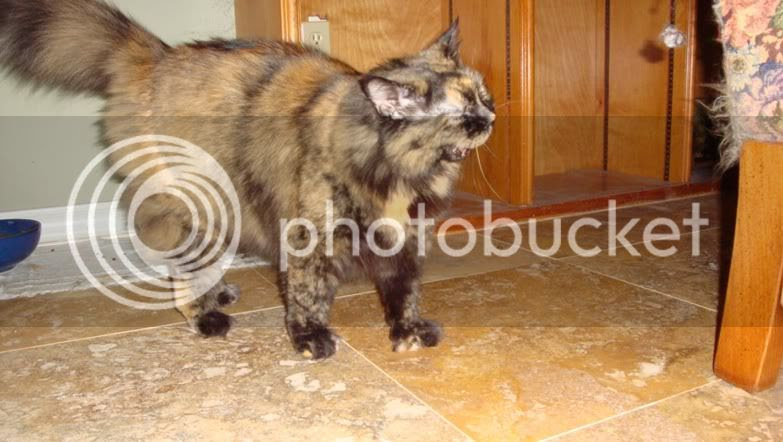 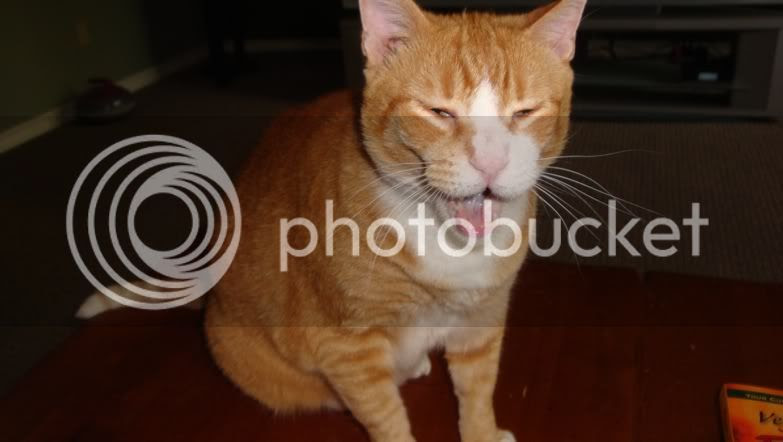 Happy Friday! Busiest damn week I may have EVER had at work and it really didn't get that way until Thursday morning! So that gives you some perspective.
Post Author: Friðvin at 6:26 PM 1 comment:

There Were Four. And Now There Are Three. 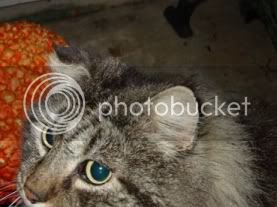 Tiger showed up here mysteriously not long after we moved here in 1997. It was several years before we started referring to him as "our cat," despite feeding him daily and petting him when he needed some love. I was so detached from him for the first few years that I couldn't even be bothered to give him a creative name. He was just a generic "Tiger."

I also have a strong hunch he is at least a partial daddy to Sweet Pea and Sissy. Their mother was a neighbor's cat and would hang around our yard a lot. And then after having a litter of kittens, she deposited them on our back patio. We took Sissy to be an indoor cat and kept Sweet Pea and Coal Pot to live outside with Tiger.

There were many times when we tried to chase Tiger away because he was prone, in his younger days, to pick a fight with Sweet Pea. But he would always return on his best behavior, for awhile anyway.

I honestly thought Tiger was dying about 7 years ago. I had found him at the front of the house and he did not seem well at all. But he rebounded. Again and again. I can't count the number of times I had thought he only had weeks to live.

In the last 3 years or so he really mellowed out. The cat fights ended. Sometime last year he began to deteriorate again. He seemed dizzy and unstable. I knew something was wrong but it took awhile for me to figure out that he'd gone completely deaf!

He was also prone to having bad allergies and those really intensified during the last year as well. And for the past 2 or 3 months he had a really nasty nasal discharge, sometimes thick and brown, sometimes bloody red. Aside from the allergies I figured he was also having liver or kidney failure.

The deafness had an impact on the way he'd meow. Sometimes he'd just lip-synch it and it was barely audible. Around feeding time he developed a meow that was more gutteral and reminded me of the noise one of the aliens would make in the old original Star Trek series from the 60s. I got pretty good at mocking the sound and I always continued talking to Tiger even though I knew he couldn't hear me.

He never gave any indication he was in any pain though. He craved constant attention and I had to keep my eye on him because he'd sneak up on me and prick the back of my leg with his sharp old man claw in an effort to get my attention. That always worked!

I knew by the middle of this week that he probably only had hours to live. His right eye was runny and gummed up, the nasal discharge was getting worse, and his habits and personality were changing. He wouldn't come to patio at feeding time.

I think the last day I saw him was Wednesday afternoon when he was sitting on a step at the garage. He seemed to be meditating as he gazed over his ranch for the final time, or he may have just been suffering from severe dementia. That was the last time I rubbed his head. He began purring and then he meowed for real two or three times. It had a sharp edge to it. A death meow. He tried walking out to the yard --wobbly-- and then he fell. He got himself up, walked up the steps and back into the garage.

For awhile he sat just inside the the door we keep open so the cats can have garage access. And then he moved on into the garage and we haven't seen him since.

We've both looked throughout the garage and don't believe he's in there. We don't have that much clutter either. I walked around the yard yesterday searching and cannot find him. And honestly, he didn't have the stamina to wander too far.

I guess he needed to go just as mysteriously as he arrived. And I hope he died peacefully. Part of me finds it to be emotionally jarring not to have some official closure (i.e. a body I can bury in the ground) but I'm convinced based on his condition that he could not have survived the past 48 hours. He decided to die his way, and on his terms, and that is natural. I prefer that over hauling him away from the house to a vet's office to be injected with chemicals.

Watching a cat get old and die is not one of my favorite things, and I'm finding that writing cat obits is also not on my list either. But there is something strangely calming about the end. 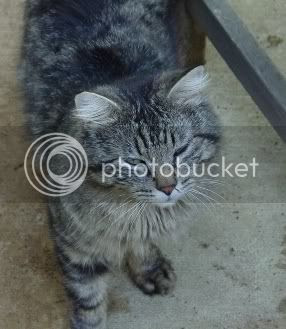 Tiger at his prime!
Enjoy your rest, old man!
Post Author: Friðvin at 8:02 AM No comments:

Stick your fingers in your pussy pads, people! It's FRIDAY! YEEE-HAAA!

(Yeah, some of us had to work today!) 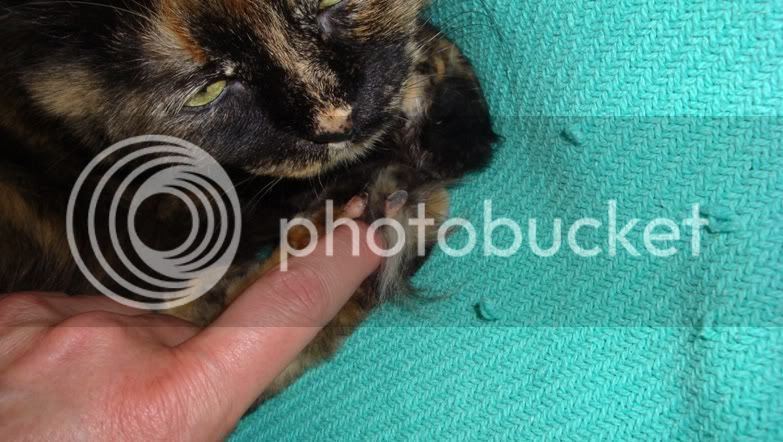 Sissy and her hairy feet! 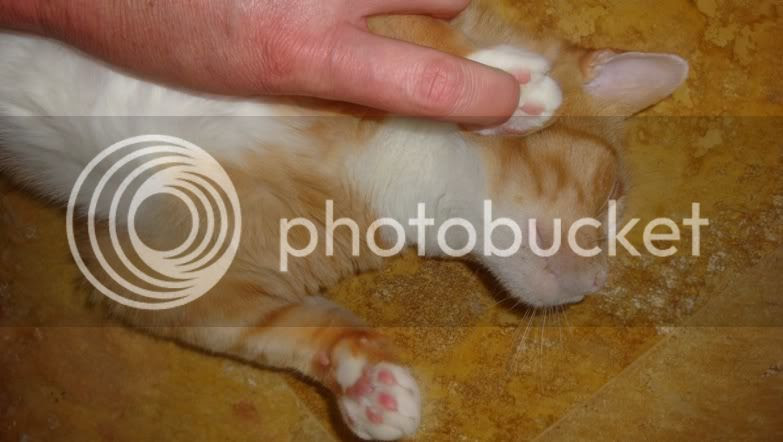 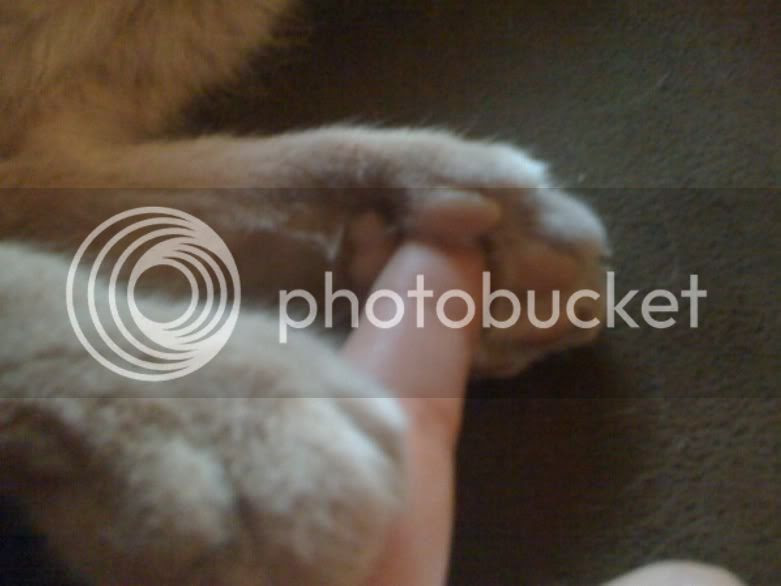 Witchay Woman gave me the idea by sending me a photo of her finger in Gus' pads! 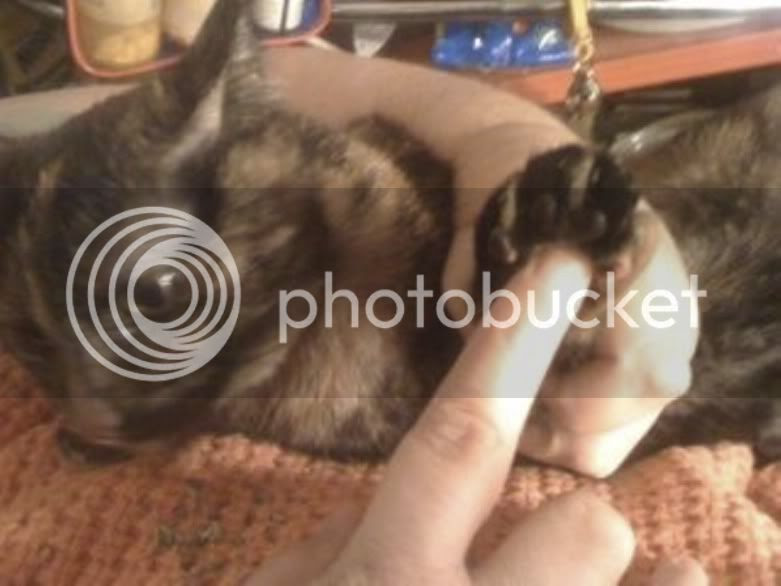 Then I had to ask Maggie Jochild to send in a shot of Dinah! (She was high on catnip!)
Post Author: Friðvin at 6:00 PM 2 comments: 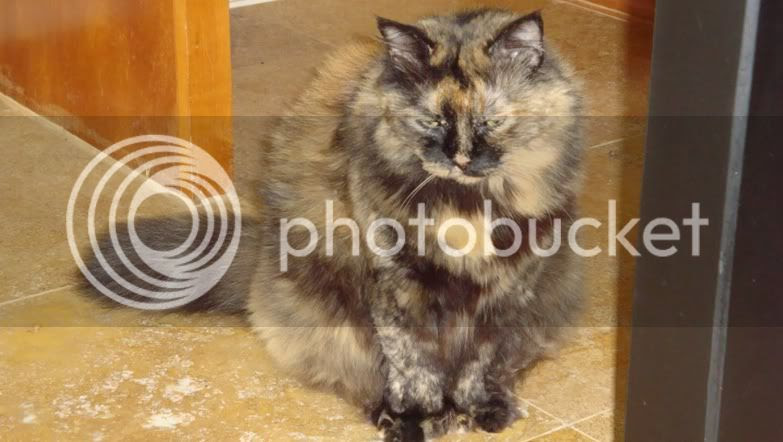 Sissy was sprawled out across the kitchen floor waiting on that special can of something yummy to be opened. I grabbed my camera and she quickly got up to pose like a proper lady vs. the slut sprawl. 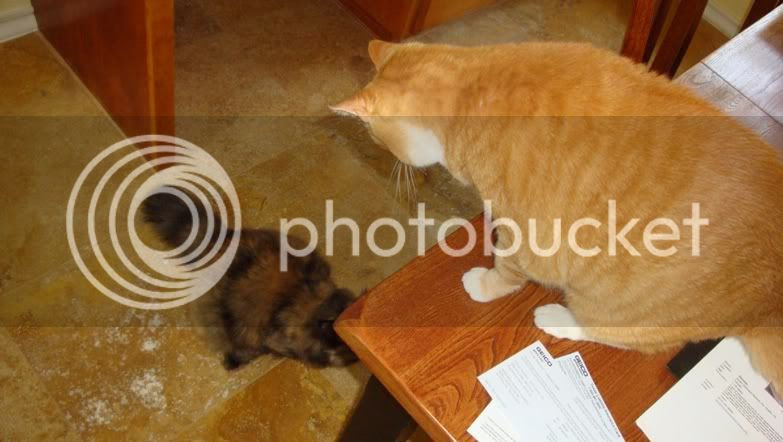 About that time the Totosaurus had to investigate and intimidate from his throne. Sissy then moved under the table to escape his gaze. 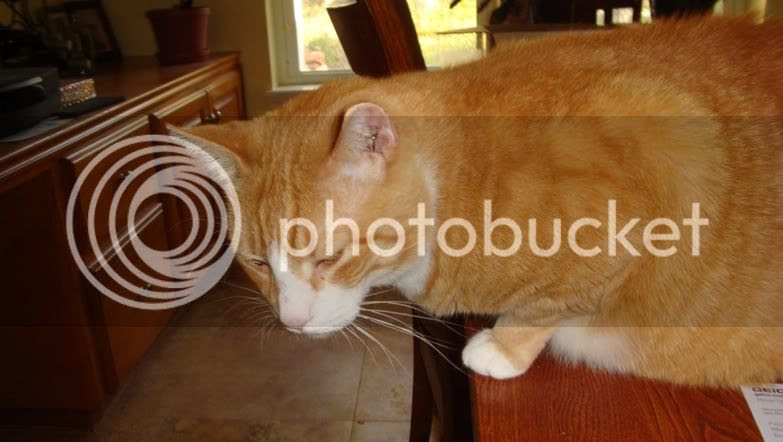 And the Tot was pleased with his accomplishment!

My computer is not cooperating tonight so there will be no pussy blog until Saturday. I probably need to reboot. This has been another hellish workday and I'm too tired to trouble myself with it. 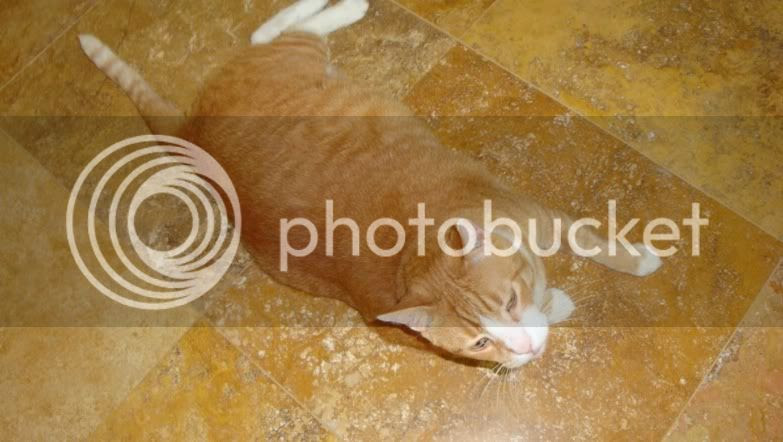 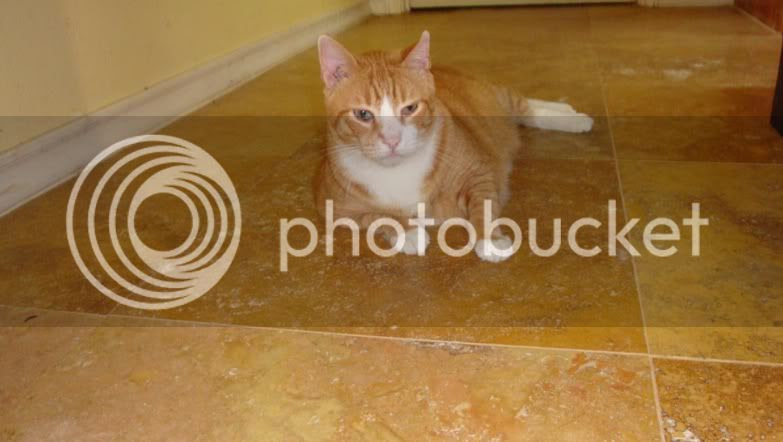 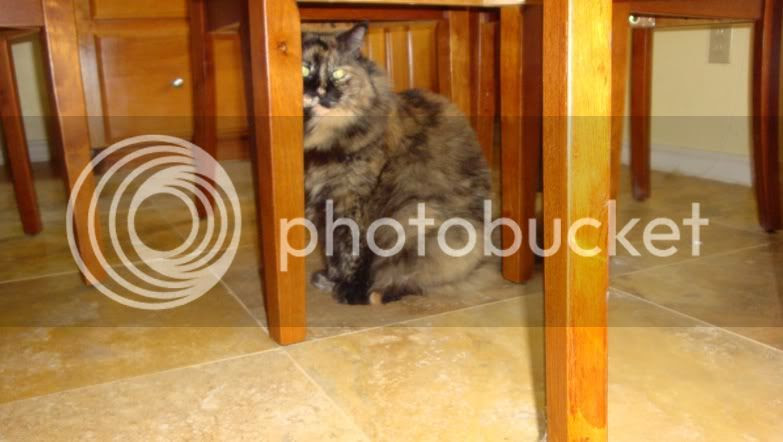 Today we went back for a 2nd visit to a pizza joint we like, and decided to check out the pet store nearby: Tomlinson's at Circle C.

Aside from a nice relaxed Siamese up for adoption, I was surprised at the brands carried at this store. I'd never heard of any of them. No IAMS; no Science Diet. It seemed like high quality stuff though, and the canned food was from $1.07 to $1.37 which is quite a bit higher than the 93 cents we pay at Petsmart.

I was also intrigued by the ingredients in many of these. Less grains. More veggies with the meat. 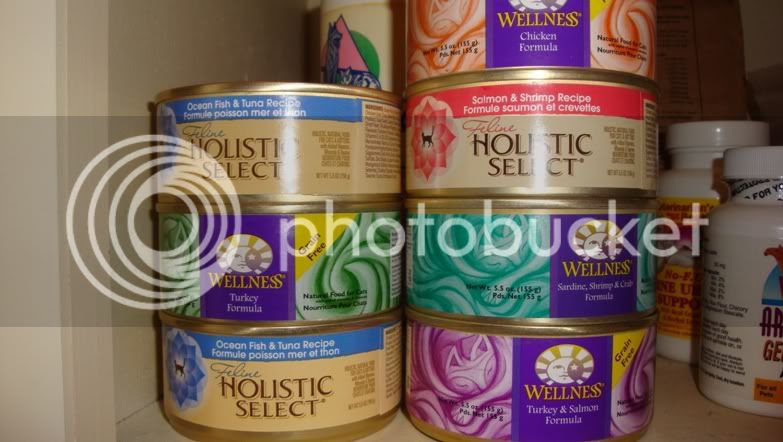 I opened up a can of the chicken tonight and was surprised when scooping it out that I could see pieces of bright orange carrot. I had no idea what to expect, but after buying 8 cans of the stuff, as well as a bag of dried food, I sure hoped they'd like it.

They did. It was the biggest hit yet.

Everyone is very laid back and content after dinner. 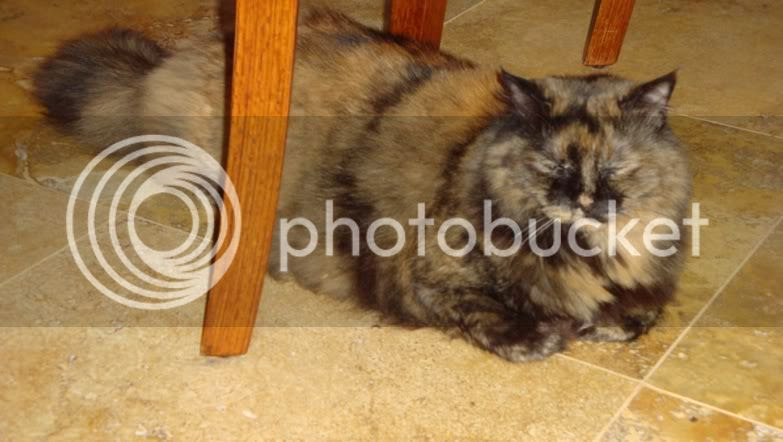 Sissy hanging out in the kitchen. 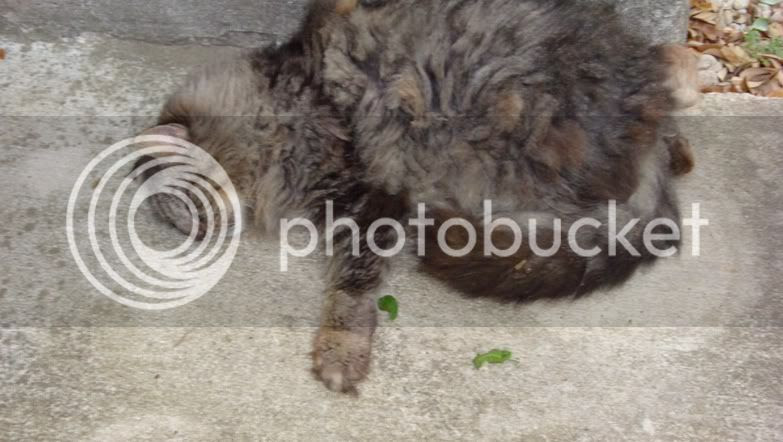 This poor old dying man is going to exit with some quality food. Poor old Tiger. 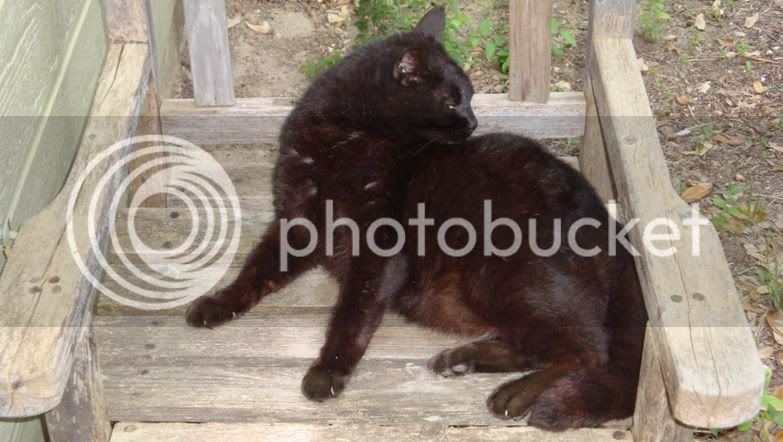 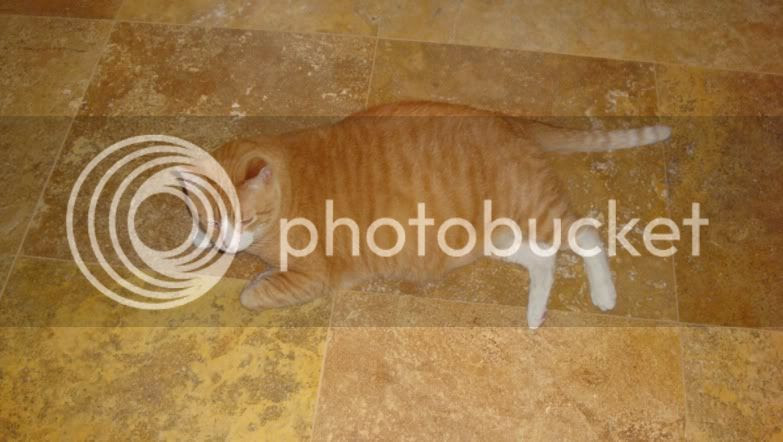 The Tot always enjoys his!
Post Author: Friðvin at 7:14 PM No comments:

On the feline menu tonight: salmon! 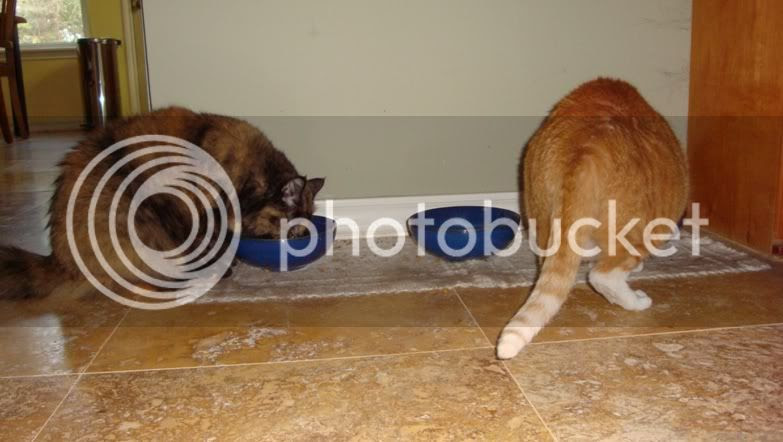 Holy crap, what a week. First week on the new job and not a moment to even check on my blog since last Friday, much less finding time to post anything!