Fine then. I'll post it this way. I am a resourceful man used to circumnavigating IT bullshit.

I even had trouble getting this far. Must be solar flares.
Post Author: Friðvin at 8:43 PM 5 comments: 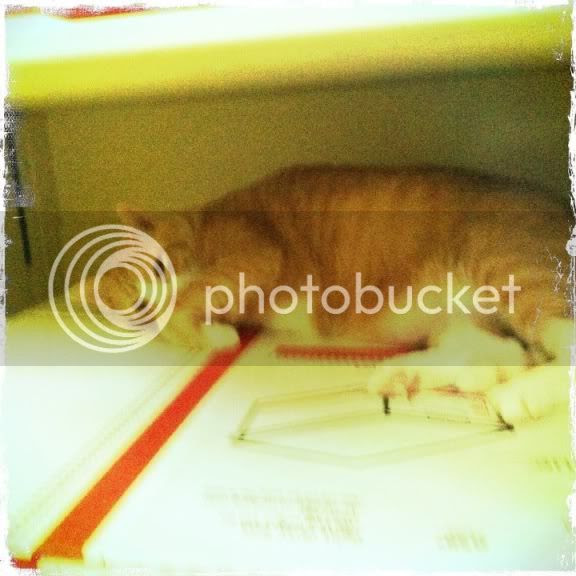 The Tot trying to snooze on a shelf in the office. Guess he got tired of "supervising." 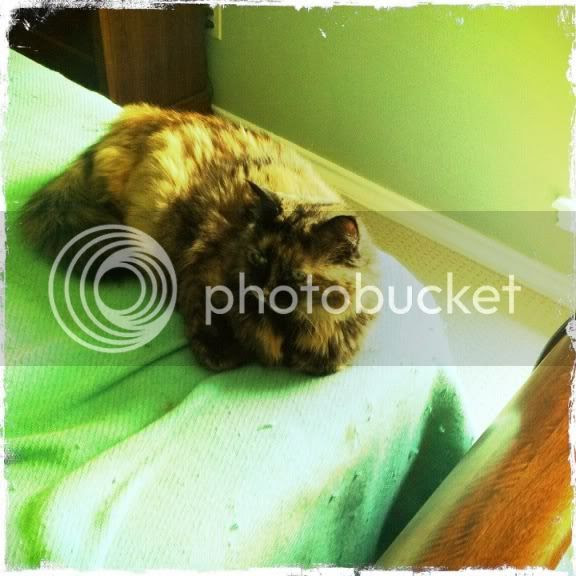 Sissy waiting on Daddy to come take a quick nap. That may not happen today.

This was a week from hell. HAPPY FRIDAY!
Post Author: Friðvin at 2:21 PM 4 comments:

By the sound's silence
you will know when I have passed
with the night watchman.
Post Author: Friðvin at 9:10 PM 6 comments:

Happy Friday! About time for me to spoon up some moist treats for the pussies! 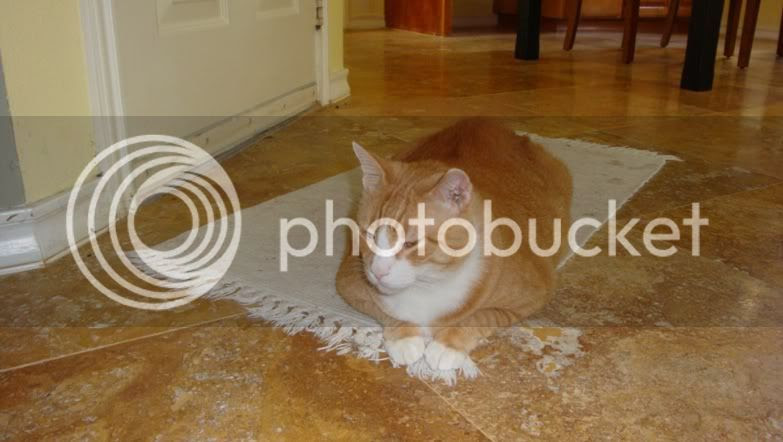 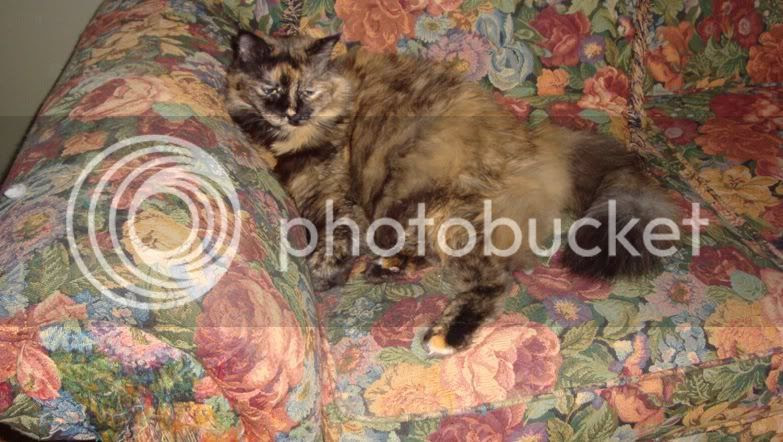 Almost two months have passed since our family’s house in Vilonia was destroyed by a tornado. That devastating whirlwind seems like a pleasant summer breeze (not that such a thing exists in Arkansas) compared to the storm of change that has become our life since that April 25th evening that at once seems so distant and at the same time seems to have happened yesterday. We have gone from being homeless, staying with family and briefly at a hotel, to buying a house in Conway. Our oldest son is finishing college; our youngest son graduated from Vilonia High School, started a job, and will soon leave for college. Along with my beautiful wife, Netta, they are the reason I live.

Zoey the cat who took refuge in the closet, and who I couldn’t find afterward was found safe and sound the next morning. Our cat, Kelly Pavlik who thought that riding out a tornado underneath a king sized bed was a good idea, was as he usually is when it comes to matters of survival, correct. Two days after the tornado our neighbors Harold and Paulette were paid a visit by Kelly, who decided to steal a bowl of food left out for their cats. Since then he has been visiting Sue, my mother in law, at her house next door to the now barren empty lot that was our little piece of heaven. He shows up every night just after dark to eat and have some fresh water, just like he did for the four years he chose to live with us. I went over to Sue’s to wait for him to appear the other night, and he showed up, looking just fine. When I carefully opened the screen door to go visit with him and catch up on things, he walked off, meowing all the way, cat cursing me under his breath. I can’t say that I blame him. Eventually he may let me near him, but I understand. That night changed little Kelly Pavlik, just as it changed everyone and everything that survived that terrible night in April. I don’t know how much I have changed; my family and friends might be better judges of that, but I know I have changed.

I was in a daze for the first few days after the storm. There were so many people that showed up at our ravaged house the day after the storm that I can’t even place them all. There were heroic acts of kindness that still bring tears to my eyes. The parents of my son Evan’s friend who showed up and gathered all the clothes they could, stuffing them in garbage bags and taking them home to wash and dry. There must have been sixty loads. Thanks to them we saved almost all of our clothing. Family, friends and strangers showed up to cut trees, salvage what they could, and put the rest in piles of rubble. We moved all we thought that was salvageable over to my mother in law’s carport to sort through. The tornado had spared Sue’s house save for some roof damage, and destruction of nearly every tree in her yard, while our house, only a hundred yards east of her had been shredded. There were times I did not want any of the stuff that was left, it seemed so unimportant; what were once things I had worked to save for and buy were now a burdensome pile of mangled and meaningless junk.

Our belongings were scattered over an acre. Bicycles and wheelbarrows had been flung 500 yards across Highway 64, along with a good chunk of our roof, into our neighbor’s yard. The master bedroom furniture had seemingly disappeared. The house itself had been picked up and moved twelve feet. The roof was gone, the shed was gone, the carport was gone. My new KIA was totally destroyed, having the misfortune of having not one, but two BBQ grills bounced off of it. My little BMW convertible was parked next to it and had very little damage. I’d like to say it was because of the fine German engineering, but like everything that either survived or was destroyed in this tornado, including me, it was just a matter of blind luck. Being in the right or wrong place at the time; no divine intervention; nothing but chance.

As much destruction that was wrought by the Vilonia tornado, it also bore a gift. It made me realize how important people are, and how powerful the bond of family, friends, and community truly is. Material possessions are meaningless. People are what matter most. We were given help from so many that I am hesitant putting names down on paper for fear of leaving one person off. We were overwhelmed with what people gave us. We were loaned a truck to use for a month. We were given food, shelter, gift certificates, money. Our son Mason was given a place to stay to finish the school year near Vilonia. People offered their homes for us to live in. Most importantly we were given hope, and a reason to fight our way out of the hole fate had dug for us. There will never be any way we can repay the friends, family and strangers that saw fit to rescue us. They are the most precious and special commodity. Thanks, Tornado, for pointing that out to me.

The days after the tornado were a blur of never-ending trips to the old house, each one dredging up good and bad memories. We were and are alternately grateful, angry, sad, happy. As the weeks have flashed by we have replaced, bought, and sold vehicles. The week after the storm as we contemplated life without a house, we were inundated with offers of places to stay. With a Great Dane and a cat though we did not want to turn an act of kindness into an ordeal for anyone. We looked at a couple of rent houses, and then got a call from two dear friends. Their friends were selling a house in Conway; they had just finished painting it and getting it ready for sale: would we like to live there until it sold, rent free? Let me think….Heck yes! It was the perfect house in the perfect neighborhood. Friends and family started bring over furniture. Cat and dog beds, household items, furniture, food, and lots and lots of love.

We loved the house so much, we ended up buying it. We closed on it barely three weeks after losing our other place. We have begun furnishing our new home. The insurance folks were a pleasure to deal with and have made an unbearable situation bearable. We still continue to sort through the remains of our old house, always hopeful that the next plastic container we go through will yield some unbroken treasure from our past, alternately surprised that a Christmas ornament survived, and disappointed that some keepsake is missing or has been damaged beyond repair. Sorting through those plastic containers is exhilarating and heartbreaking. It seems like a never ending process.

We go shopping to replace things. Every decision seems monumental, and oft times we end up not buying anything. For everything we contemplate buying we think “How will t his look when it gets destroyed by the next tornado”? Nothing is permanent, nothing endures. As Stephen King said, “Everything’s eventual”. Through it all though, we press on. We have hope, we have friends; we are alive, and we are thankful. We love, and we are loved.
Post Author: Wilf at 12:28 PM 1 comment:

Holy shit, what a week!

I spent a few minutes on the bed this afternoon trying to catch a quick nap. That didn't happen. Thought I'd share with you what I get to see in my field of vision when I get on the bed. 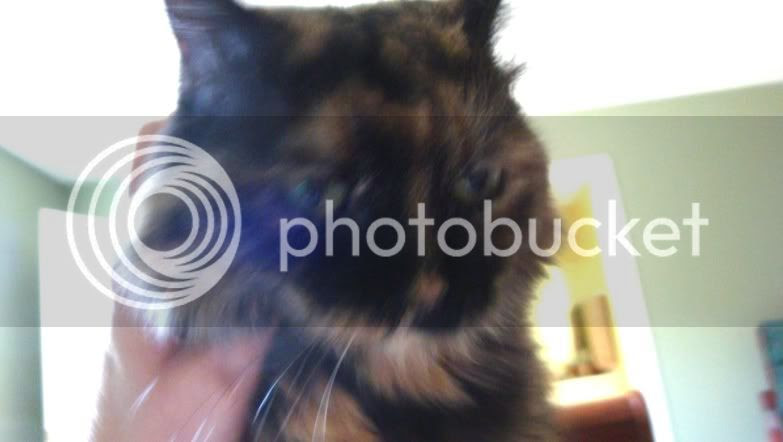 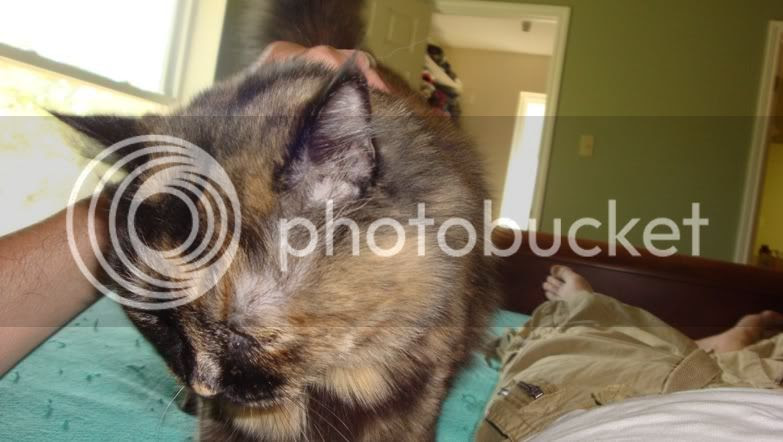 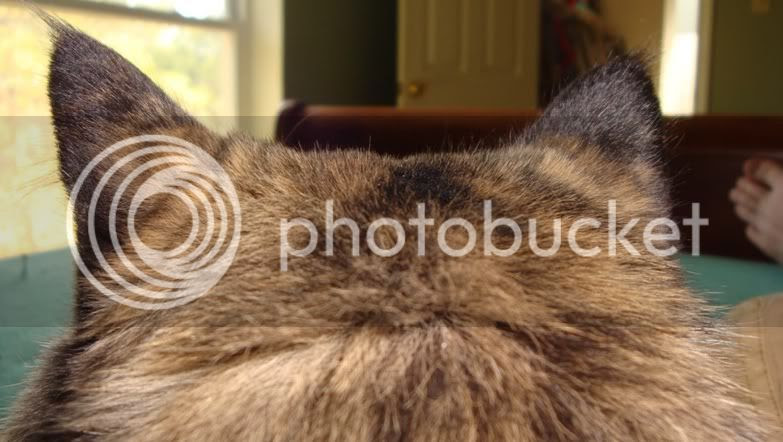 Sitting on my chest with hairs tickling my lips and chin. VERY relaxing! 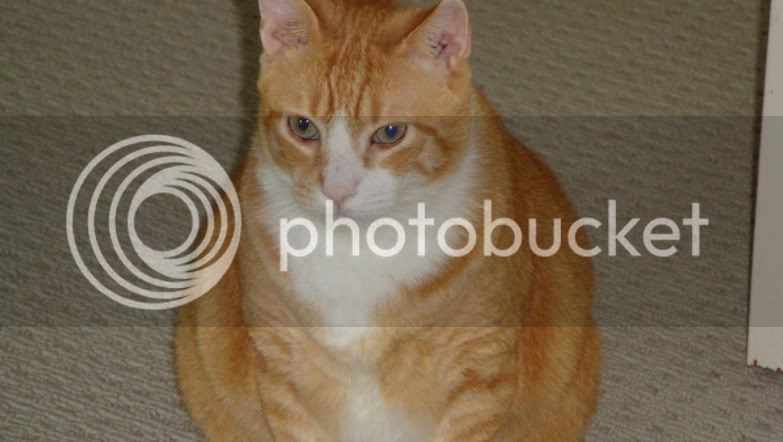 Of course, the Supervisor must monitor the situation. Always. 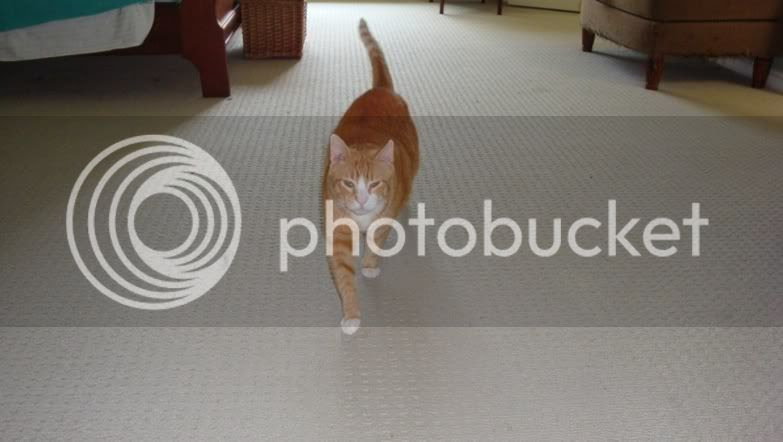 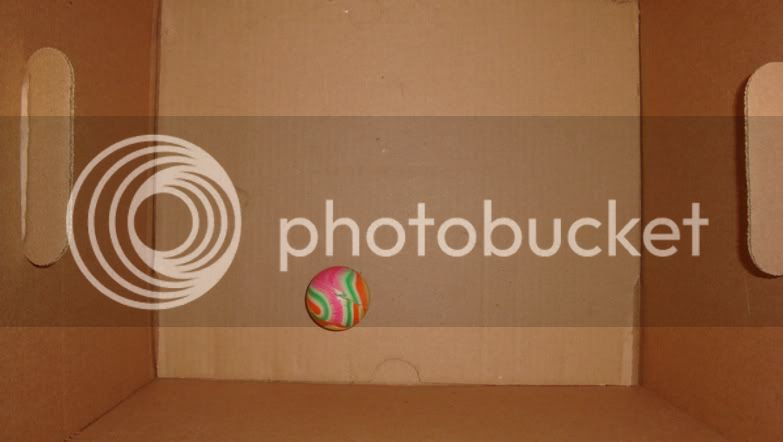