I lost a Facebook friend within the last week and it wasn't due to any defriending on either side. Kristopher was fighting cancer and unfortunately his body could take no more of that battle. Although we never met personally, Kristopher and I shared a lot of interests and cats were one of them. He was particularly fond of Tater Tot, and who isn't? I know he would have given anything to see the Tot in person someday. So I am dedicating this post to him and all 19 of his rather amazing years of life.

Kristopher was keeping a very low profile on Facebook during the entire month of April so I knew he was going through a rough spell. Although I tried to suppress my thoughts, I knew it wasn't good. Knowing that if he was rarely on Facebook, he probably wasn't doing much else online either, so on April 13 I posted a Tot exclusive on his page. That was one of the last times we had any direct interaction. 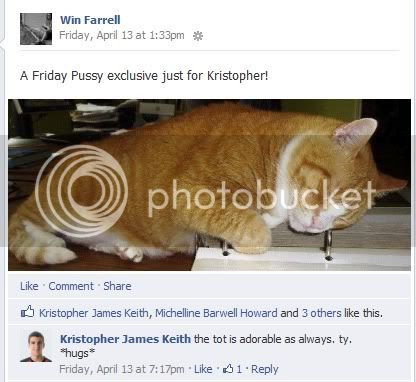 Prior to his downturn in April he would frequently start prompting me around 5pm for the Pussy Blog. "Yeah, yeah, relax; I'm working on it." I would have been catching hell today for be so late. And I wish I was.
Post Author: Friðvin at 7:20 PM

Hard to read this without tears. He was such an angel and I loved to see how he would take you to task and give you a rash about almost anything you posted.

His life on this earth was almost to sad to think about yet he had such a loving and playful spirit. I'm happy that he found a family who loved him and that his pain is over.

I am so sorry that he is gone.

Leonie Daecher said...
This comment has been removed by the author.
12:51 PM