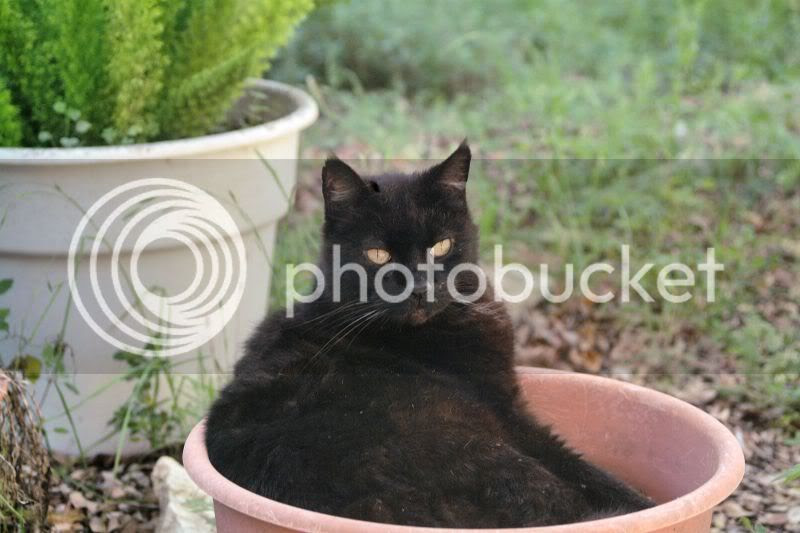 What a strange week it has been.  Sweet Pea was his usual old self until a few days ago when I noticed he wasn't eating as much.  Then a day or two later it was obvious he wasn't eating anything.  On Wednesday Sheldon noticed he seemed weak and wobbled a bit when walking.

We agreed he probably needed to see the vet.  Sheldon made the call and brought the pet carrier out to the patio.  Sweet Pea was curled up at the fence in the back of the yard.  He seemed oddly nervous when I went to fetch him.  In fact he tried to get away from me but I carried him to the patio and poked him into the carrier.  He let out a very guttural protest -- a sound I would only hear him make when he had eaten something and was about to vomit, or when he had a live critter in his mouth.

I really didn't think for a moment that it would be the last time I'd see him.  But that's how it played out.  Sweet Pea fell to the same liver/kidney failure that claims so many other cats including at least two of our previous felines. 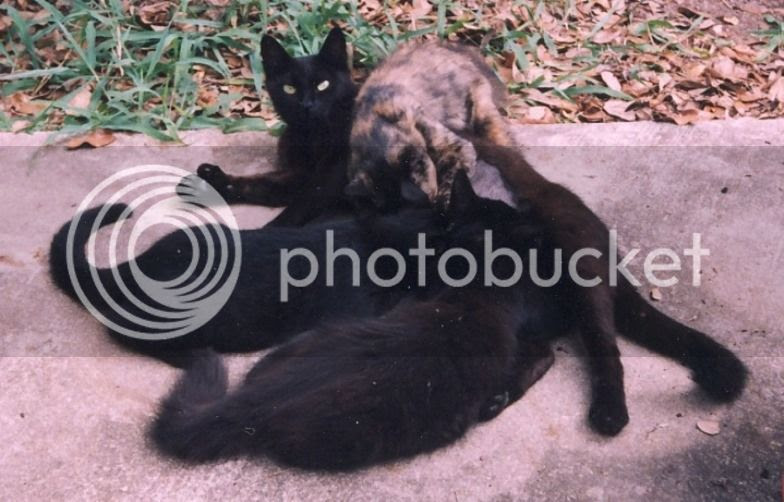 Sweet Pea and his two siblings were brought to our back patio by their mother.  The mother lived across the street from us and I never knew her name.  I just referred to her as Big Thumbs.  She was a polydactyl with an extra toe on each of her front feet giving her the appearance of very large thumbs.

There was Sweet Pea, the short-haired black cat; Coal Pot (on bottom in photo) was black with longer hair, and then Sissy the tortoiseshell.  Sissy, named for the Sissy Hankshaw character in Even Cowgirls Get The Blues, also inherited the big thumbs.  Sissy was the only one of the three we kept inside the house.  Coal Pot disappeared after perhaps a year.

Sweet Pea has been a fixture in the back yard for so long I can hardly believe I won't be watching him strut across the yard as I sit at my desk working during the day.  On a positive note I won't be having to run out on a lizard rescue mission every few days this summer.  He had a nasty habit of catching lizards and bringing them to the patio in his mouth.  I'd have to grab his neck sometimes to get him to release them and often they wouldn't even have a puncture wound.  I won't miss those moments.  The lizards can finally live in peace.

I am convinced Sweet Pea, perhaps like all cats, was psychic.  He was very skittish around strangers.  A strange car pulling into the drive would raise all kinds of red flags with him in spite of the fence between the yard and the drive.  And yet, if he was sleeping, I could go out the front door of the house and walk around to the back, open the gate and walk on up to the patio where he was sleeping without him even flinching or raising his head.  Somehow he always knew it was me and not a stranger. 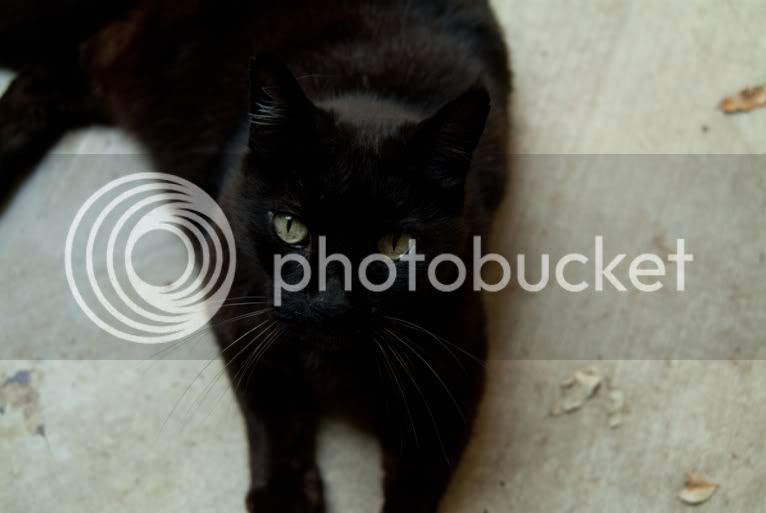 He would always respond in some way when I'd say his name.  Even when he was coiled up sleeping I could whisper his name and the white claws on his feet would extend along with a bit of paw curling.  He also enjoyed it when I would grab his snout and rub up his face, across his ears and all the way down his back to his tail.  One of my favorite things to do was to grab his face with my hand and shake his head vigorously while saying "Sweet Pea!  I'm going to pinch your head off!"  He actually enjoyed that.

Once in awhile we'd allow him to come in the house in the evening for a few minutes.  He'd walk around and check out everything and then was ready to go back out.  Two or three times I took him to the master bedroom where Sissy lives so he could visit with his sister.  Sissy is about ten times more skittish of just about everything.  She despises Tater Tot and Jessie Lee and prefers solitude and being left alone.  Allowing either of those cats in the bedroom would send her scurrying for a place to hide.  Strangely enough, even though she hadn't been with Sweet Pea since they were kittens, she had no problems with his presence.  I would even take Sweet Pea in there and place him on the bed with her and there would be no adverse reaction.

This is my fourth cat to cross over to whatever comes after.  Three of the four have timed it to happen around some memorable date.  Jezebel was the first and had to be put down on Memorial Day.  Samantha just expired in the house on some anonymous date that I don't specifically recall.  Tiger took care of his own expiration last year by doing it on or just before my birthday, and now Sweet Pea exits on Good Friday which made it impossible for me not to... umm...resurrect the Friday Pussy Blog.

So long, boy.  I know you loved me and the feeling was mutual.

Ah Sweet Pea! You had yourself a good life with Win and Sheldon, didn't you, boy? On to your next adventure now leaving behind loving memories for those you've left here. Rest in Peace.

i'm sorry Win...never easy losing a loved one no matter what body they're in...hope you and sheldon are ok.

I am so sorry to hear about Sweet Pea. All cats are precious. It's so hard to go through the loss... we've done it 4 times in recent years too.

Anonymous said...
This comment has been removed by a blog administrator.
6:56 PM

Anonymous said...
This comment has been removed by a blog administrator.
3:00 AM

Anonymous said...
This comment has been removed by a blog administrator.
6:16 AM

Anonymous said...
This comment has been removed by a blog administrator.
7:30 AM

Anonymous said...
This comment has been removed by a blog administrator.
2:31 AM

Anonymous said...
This comment has been removed by a blog administrator.
7:31 AM

Anonymous said...
This comment has been removed by a blog administrator.
9:02 AM

Anonymous said...
This comment has been removed by a blog administrator.
12:55 PM