That line between life and death is such a strange place.  While dealing with it seems to get easier, it's never easy.  And when that line becomes a thin sliver it becomes more strange than painful.  My orange boy seemed almost playful on the floor of the examination room at the vet's office.  As I stroked him and caressed him the purring was intense.  I swear I think he knew the end was near.

The doctor was very open and honest about it.  This was her recommendation based on his low body temperature, his heavy breathing, and the lump in his abdominal area.  And I knew this going in because I've seen it too many times before.  His energy level since the past weekend was probably a tenth of what would be normal.  (He did show a burst of resistance when I was trying to get him in the carrier.  I guess he was holding enough in reserve to protest that most-loathed process.)

They took him to another room to prepare him for the injection and then brought him back to me for a final brief encounter.  As much as I wanted to sit there and love on him all afternoon I knew there was no point in dragging it out.  He was my boy and he knew it.  He was comfortable with me there.

The first injection would simply make him sleep.  And it literally did not take more than a few short seconds before he rested his head on his paw.  The doctor asked if I wanted to spend more time with him and offered me a beeper I could use to summon her when I was ready.  It was a nice gesture and I'm sure some people need that.  I didn't.  It was time to move forward with this.  I wanted him to be set free of his pain and discomfort more than I wanted a few more sleeping minutes of his companionship.

This injection would stop his heart and his breathing.  As she began the injection it backfired and sprayed both of us with the sticky pink death goo.  She apologised profusely and went to fetch another syringe.  I'm not sure it mattered.  His breathing stopped just seconds later while my hand was still comforting him.  She continued with the replacement syringe just to be sure the job was being done.

And that was that.  All of my anxiety from the past few days was vanquished.  I was still sad but relieved.  The quiet drive home was vastly different.  Even with four other cats in the house there is a strange void right now.  That will dissipate as well.

I grabbed my gloves and a shovel and dug another in a series of holes in the ground.  When I pulled his limp lifeless body from the carrier I was somewhat startled by what's left behind in the absence of life.  Life is what drove that body for his 13+ years of robust existence.  The connection we shared was evident when we had eye contact and that was driven by life as well.  What was life just a short time earlier was now not life.  The eyes which had been a passage were now just non-functioning eyes leading nowhere.  How can anything so natural feel so strange?

I still have to detach myself from thought when I'm burying my companion of so many years.  I have to become almost robotic.  It's a job needing to be done and it's my job to get it completed.  I did.

I loved my boy. 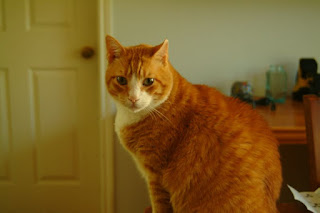 Goddamnit, Win. I am so, so sorry.

So sorry. I know he was well loved and will be sorely missed.

So so sorry for your loss. Beautiful and sad post about your old friend.It's never easy.

That made my eyes wet. I feel really sorry for you and Sheldon. Such a sad thing...

Tater was only 14? My condolences. He had a charmed life as we provide.

Hi Blogger,
Blogs are competing for awards.
A total of $30,000 cash prize-winning inter-blog competition has started. You have a great blog! So join you now. We will be honored to welcome you to this beautiful web-activity, which will be awarded to many bloggers. You are invited to the blog writers competition for May-June 2017. You have absolutely visited to get detailed information and to apply.

Lovely blog. Thanks for sharing with us.

Your post topic is very informative and useful for all readers

This is wonderful information, thank you.