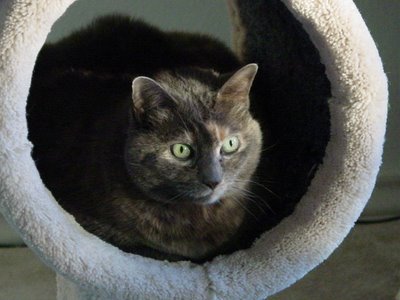 The Pussycats now have me in cat mode. Being Friday, let's get right to it.

Two years ago around this time, our dear old Jezebel became ill. I didn't immediately take her to the vet because I had no idea how serious it was. She was basically immobile over the Memorial Day weekend. By Sunday afternoon I was coming to the realization that Jezebel was about to leave us. She'd remained under a chair in my bedroom for the entire weekend. I was so stressed out because I knew she needed to see a vet and I was thinking I wouldn't be able to get her in until Tuesday.

Monday morning when I awoke, I went to check on her and there was a thick brown fluid running from her mouth to the carpet. I went to call the vet, hoping they would be open on Memorial Day, and fortunatetely they were. I gently picked her up and placed her on a cardboard box top and took her to the car. Although the drive to the vet is only about 5 minutes, those were some of the most agonizing moments I've ever experienced.

It didn't take the vet long to determine that Jezebel had suffered kidney failure most likely and there was nothing to be done. The decision to have her put to sleep was placed on me and I had to make the right choice, painful as it was.

I fell to the floor sobbing. I gave Jezebel a final kiss on the head, something she always liked. She looked into my eyes and purred. I broke down again, falling to the floor in tears as the nurse took her from me. Jezebel understood we would not be together again in that form.

A few minutes later I was bringing Jezebel home in a plastic bag. I buried her in a circle of catnip. That sweet old girl will never be forgotten. 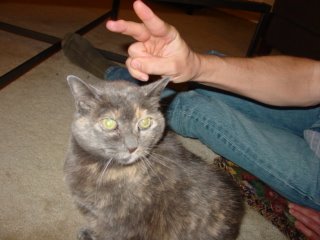