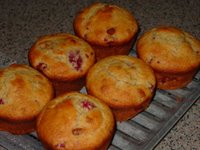 Two students could face up to 10 years in prison for giving out marijuana-spiked muffins in a senior prank that sent 18 high school employees to the hospital and triggered an FBI and terrorism investigation.

I don't know, does this seem a tad bit reactionary? We're almost 5 years into this "war on terror" and I think it has people going off the deep end. Yeah, stupid prank. What kind of teen-agers would waste good weed trying to get their teachers involuntarily high? And how naive to think this would not cause an uproar.

It's fun to imagine your teachers getting silly and giggly and not knowing the cause. But how much friggin' pot did they put in these muffins?

I wonder, if they had been told immediately after eating them, what the reactions would have been. Were they having nausea, lightheadedness, etc., because they simply didn't know what was going on?

I baked marijuana brownies once about 20 years ago. I didn't want to waste a huge amount of my stash on an experiment with an unknown outcome. I had no recipe but decided it should probably be concentrated as much as possible. Rather than use the pot in the entire pan of brownies, I built a little dam in the pan so the pot would all be contained in about 2 brownies.

A friend and I split the brownies and began waiting for the high to kick in. It was late evening and after a few hours nothing much happened. I thought I'd just wasted my stash.

I've got to tell you, I was in a splendid frame of mind the next day. And unless it was a hallucination, I swear I think I shit green.

The FBI investigated because the case involved a contamination of the food supply at a school. A joint terrorism (this pun is just way too much to resist) task force found that terrorism was not involved, but determined the muffins contained marijuana and turned up a surveillance video of the delivery.

The sentencing will be interesting. Surely they won't be given a 10 year sentence. It seems outrageously insane for a prank by 2 high school students over marijuana-laced muffins, and healthy bran muffins at that!

In the article from today's Austin American-Statesman it reports that the Dallas County district attorney's office "is seeking to upgrade the charges, due to the presence of illegal drugs, to second-degree felonies, which could mean up too 20 years in prison."

Awww, come on! 20 years for that? Murderers have gotten lighter sentences, and in some cases none at all. (O.J.)

The photo above is my own batch of raspberry muffins sans weed.
Post Author: Friðvin at 8:10 AM

One year, my sister made pot cookies, put them in fancy tins, and gave them out as Xmas presents. Personally, if I'm gonna, a hit from a bucket-bong is my choice (though a killer on the lungs), to the effects from eating the stuff; being a slow taker, it's a few hours later that you realize, yes, I am in la-la-land. I prefer the 'now' effect!

(Came over from AMERICAblog.)

i agree, i am way too selfish with my stash to bake it into muffins for folks who might not appreciate it.

hey, it' me again..
i like your sentiments about Joe Lieberman from Pam's page. you're spot on my friend.

Thanks Jay, and regarding the cat question, we have FIVE cats. I'm going to post a feature on each one every Friday. So check back!

Your are Nice. And so is your site! Maybe you need some more pictures. Will return in the near future.
»

I find some information here.