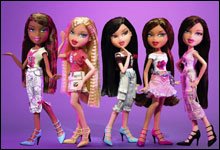 Hasbro has cancelled plans to release "The Pussycat Dolls".

Hmmm, they don't look all that "risque" to me. I guess it has to be put in the context of their intent. They do seem to have the potential to be "up to no good."

"Go to any high school in the US, and everyone is talking about a dress code," she says. "Should girls be exposing their bellybuttons in Algebra class? Lots of women don't think about that as anything flamboyant or unusual," says Joan Jacobs Brumberg, who teaches about the history of female adolescence at Cornell University.

Link here to the full story reported in the Christian Science Monitor.