After a day in which same-sex marriage was legal in Iowa, the sky didn't fall. The foundations of society didn't collapse.

The large, angry protests some had imagined never materialized in this city, the state’s most populous. Neither did the crowds of couples from all over the nation that some feared might create a carnival-like atmosphere captured in earlier images from other places.

By noon, no protesters could be found outside the marriage license office. Extra sheriff’s deputies assigned to keep order milled around the Polk County recorder’s office, looking bored. And an early-morning line of dozens of same-sex couples waiting to apply for licenses had dwindled into a few people discussing recent rainfall patterns.

By the end of Monday, more than 200 couples had applied and paid $35 for marriage licenses in Iowa.

The Des Moines Register is reporting same-sex marriage applications on Monday to be in excess of 380. 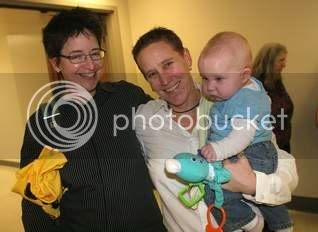 Chris Patterson, 36, and Jennifer Harvery, 37, both of Des Moines, applied for a marriage license Monday morning. With them is daughter Harper Patterson, 6 months.

Iowa is bracing for a possible swine flu outbreak; however there are no indications this is a result of the same-sex marriage licenses issued on Monday.
Post Author: Friðvin at 6:27 AM