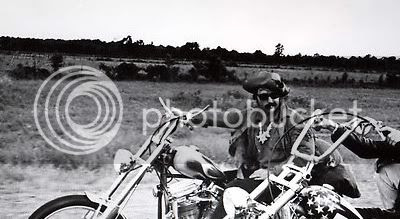 I was obsessed with his bizarre roles throughout the 1980s. And he had quite a few of them. Obviously Easy Rider is near the top of the drug-induced heap. But for my money, Blue Velvet was the one placing him on the Pedestal of Weirdness.

I can't even remember how many times I saw that film when it was running in theaters. I have a copy on DVD. And to this day, I still quote lines from the film, spoken by Frank Booth, the character played rather convincingly by Hopper.

I can't even see a Heineken without hearing "FUCK that shit. PABST BLUE RIBBON!" playing on a continuous loop in my head.

Mr. Hopper, who said he stopped drinking and using drugs in the mid-1980s, followed that change with a tireless phase of his career in which he claimed to have turned down no parts. His credits include no fewer than six films released in 2008 and at least 25 over the past 10 years.

Thank you, Dennis. Rest in peace. You were a rebel without a pause.
Post Author: Friðvin at 7:00 AM