I have got to distance myself somewhat from politics. That's not to say I'm going to stop reading or turn off the TV and pretend it doesn't exist. But I do need to get over this notion that my one vote can make a difference when I'm living in a country where 50% of us don't bother to vote, and 95% of those who do think the only serious choices are Democrats or Republicans, with the occasional independent thrown into the mix who, in most cases is either a former Democrat or Republican.

I am exhausted with watching the pendulum swing every election cycle in only two directions: left or right Democrat or Republican.

It was crystal clear to me in 2007 that the economic meltdown was going to be one hell of a bastard, and I could not fathom why anyone would seek the highest office in the land with the job of turning the country around after 8 years of the Bush regime and two wars in progress. For as much as I wanted to see Democrats get swept back into power, it seemed like a suicide mission. Lo and behold, my predictions are right on track.

Unfortunately, we seem dangerously close to returning those to power who helped get us where we are now, because of our frustration that the new guy hasn't restored health, vigor and free-wheeling prosperity to a nation which has been kicked in the gut and is spitting up blood. So let's vote Republican again and get back in the ring for another and final ass-whuppin'?

Well, be my guest. It's your country too. Although I must say I refuse to be held responsible for the outcome. I'm not one of the people who is going to sit out any election due to disenfranchisement with an impotent political system. I will vote, as I always do, with a sound and intelligent mind, for the best candidate on the ballot. I will come home, turn on the TV, and watch as the votes are tallied across this nation. And I will hope for the best. I will hope that ignorance does not prevail. I will hope that racism is not a factor. Without a doubt, in some races I am going to be disappointed. It seems inevitable.

For the last 25 years or so I have waited for the next generation to come of age and get involved politically. And now that the moment is here, I can't begin to express my frustration. Yes, they did seem energized in 2008 by the message of hope and change coming from a man who would make history as the nation's first black president. Whether that enthusiasm will carry on into the 2010 elections remains to be seen. The signs aren't looking very good. 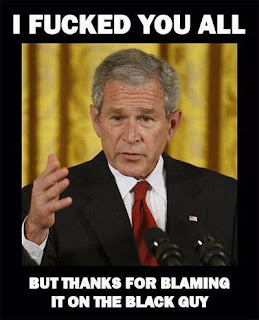 This graphic cracked me up. A few days ago a Facebook friend of mine posted it to her page as-is, and without additional commentary. What soon followed was an eye-opening outburst from a guy hurling insult after insult at blacks, Muslims, gays, and people who work for a living but happen to have a differing political view. He essentially had zero tolerance for anyone who didn't share his beliefs. And this wasn't some fellow with white socks pulled up to his knees and tea bags hanging from his hat; this guy was young enough to be my son. Yep, that's right: the next generation I've been waiting on for two decades. And you can bet your chapped ass he's going to vote.

This was not some isolated incident either. I see this in one form or another on a regular basis, on Facebook and elsewhere. Whereas we once differed by party affiliation (or lack thereof), and on the issue of abortion, we now differ on sexual orientation, whether gay people should be afforded the same right to engage in a state-sanctioned relationship which conveys rights and privileges currently provided to opposite-sex couples. And lately, we have begun to differ over truly inconsequential issues like...where law-abiding Americans should be allowed to build a mosque, and in some cases, whether they should be allowed.

All of this plays perfectly with the building opposition to all things Democrat and Obama. Every single fringe issue does nothing but bolster the opposition and divide the rest of us.

So you'll have to pardon me if I sit quietly the next two months, watching and waiting. It's quite clear I'm not going to change any minds with my viewpoints no matter how eloquently and logically they are presented. So I simply won't waste my time. Besides, Americans of voting age are, by default, adults, and should have the wherewithal to make rational and intelligent decisions based on the plethora of available facts these days. If they, as a voting bloc, manage to usher in a different kind of change which is motivated by fear and hatred, so be it.

I have and will do my small part to prevent that madness from happening. Whether the rest of us of sound mind and body care enough to do the same remains to be seen.
Post Author: Friðvin at 10:06 AM

Email ThisBlogThis!Share to TwitterShare to FacebookShare to Pinterest
Labels: Politics