I fully expected the California Supreme Court to uphold Proposition 8. And yet I was infuriated at the decision when it was announced. And yet, I can even agree with their rationale.

In a 136-page majority ruling written by Chief Justice Ronald George, the justices said it was not their job to address whether the ban was wise public policy, but only to decide whether it was constitutionally valid, while "setting aside our own personal beliefs and values."

At the same time, I can agree with the New York Times editorial today which states that the California Supreme Court "got it terribly wrong."

In addition to denying basic fairness to gay people, the court’s 6-to-1 ruling sets an unfortunate legal precedent that could allow the existing rights of any targeted minority to be diminished using the Election Day initiative process.

The case turned on a reading of California’s rules for changing its Constitution. Essentially, the majority decided that Proposition 8 is an ordinary constitutional amendment, requiring approval only by a bare majority of voters, rather than a more far-reaching “revision.”

Revisions require a more deliberative two-step process: either a constitutional convention or a two-thirds vote of the State Legislature followed by a referendum.

So, even if we got screwed on a legal technicality, I can't allow myself to go on an anti-California crusade nor can I start bashing the California Supreme Court. The problem lies with the California constitution, outside special interest groups who poured millions of advertising dollars into the effort to pass Prop 8, gullible voters who are essentially brainwashed, and even apathy among registered voters who might be our allies but didn't bother to show up at the polls.

The idea that a minority of registered voters can control a civil rights issue and create a 2nd class tier of citizens while calling it "the will of the majority" simply fills me with rage.

We've just got to pick up the pieces and start again. We can start gathering signatures to repeal it, or hope for a US Supreme Court intervention.

Theodore B. Olson and David Boies, two prominent litigators who opposed each other in the Bush v. Gore election challenge in 2000, are challenging Proposition 8 on those grounds in federal court.

The pair filed a lawsuit Friday on behalf of two gay men and two gay women, arguing that the marriage ban violates the U.S. constitutional guarantees of equal protection and due process.

Olson, a former U.S. solicitor general, said he hopes the case will wind up before the U.S. Supreme Court.

"This is a federal question," he said. "This is about the rights of individuals to be treated equally and not be stigmatized."

Meanwhile, gay rights groups are starting work gathering the 700,000 signatures required to place a repeal of Proposition 8 before voters in November 2010.

Frankly, both options scare me. Regardless of the economic climate, the opposition seems to have a bottomless well of cash for their operations. But one would hope this issue has received enough attention now to diminish the impact of those who oppose same-sex marriage.

As for a SCOTUS ruling on the matter, let's just say I believe it would be a 5-4 decision, which ever way it goes.

But let's look for the silver lining. In addition to the 18,000 existing same-sex marriages being allowed to stand, there are still civil unions (better than nothing!) until we can correct this horrible wrong which has been imposed on the state.

The court’s opinion, written by Chief Justice Ronald M. George for a 6-to-1 majority, noted that same-sex couples still had a right to civil unions. Such unions, the opinion said, gives those couples the ability to “choose one’s life partner and enter with that person into a committed, officially recognized and protected family relationship that enjoys all of the constitutionally based incidents of marriage.”

It's going to be long, slow and agonizing. Such is life. 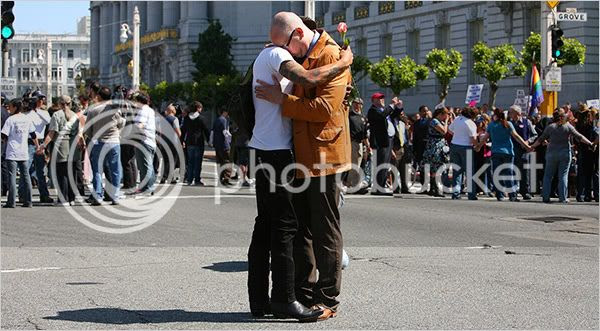