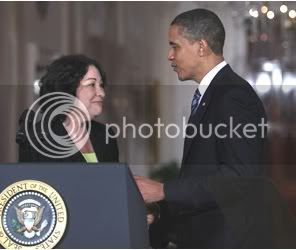 Judge Sotomayor is Mr. Obama’s first selection to the Supreme Court, and her nomination could trigger a struggle with Senate Republicans who have indicated they may oppose the nomination. But Democrats are within reach of the 60 votes necessary to choke off a filibuster, and Republicans concede that they have little hope of blocking confirmation barring unforeseen revelations.

Initial reaction to the selection reflected party divisions and signaled that Judge Sotomayor’s confirmation hearing before the Senate Judiciary Committee would be spirited.


Spirited indeed. Let the Republicans have their rants, their meltdowns, whatever. Go ahead and continue to alienate women and Hispanics in one double whammy.

This should be an interesting evening for tequila, "Hardball," and "Countdown" since a California Prop 8 ruling is also forthcoming shortly.