At 4:00 today I turned on the TV so I could start recording a curling event and noticed CNBC wasn't starting the curling until 5:00. And then my eye scanned down to Glen Beck on Fox.

I have two clients who are advertising in that program, one of which demanded this week to get out, so I was a little curious to see if I was successful, coupled with a desire to see the other client's spot which I've never seen. (In the former I was not successful; in the latter I was.) 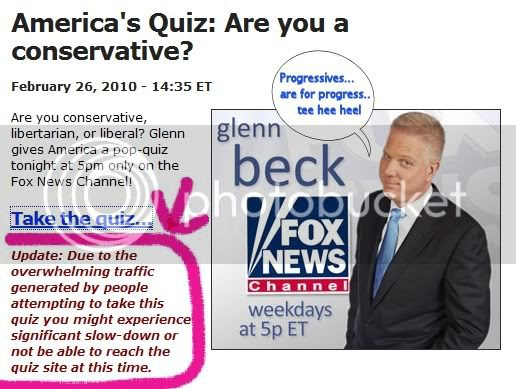 Now, I've never watched Glen Beck's show. Ever. So, first time for everything as the saying goes. It wasn't bad. It was all based on "Who Are You," in terms of your political beliefs vs. the label you give yourself. If you think you are a liberal, take his quiz and find out for sure.

He went through a series of questions that were on the quiz and polled his audience on how they answered. Needless to say, the questions were rather limited without exploring the full scope of the political spectrum or the subtle nuances surrounding many important issues of the day. They seemed, in fact, to be caricatures of beliefs by the most hardcore of any label.

Since I consider myself to be sensible, logical, and practical, and a thinking man vs. someone who just hangs a sign on his back saying, "I'm Liberal," it could skew things. Interestingly enough, during the entire time I was watching Beck go through the series of questions, I found almost nothing I disagreed with in terms of the points he was making. Naturally, his audience was also in complete agreement. Yet, it's bizarre that if we all sat down and talked through these issues, we'd be at each others throats within a matter of minutes. Interesting.

Here's an example. While he was making perfect intellectual sense in posing his positions, he couldn't mask his ridicule of progressives when launching into a mockery by raising his voice effeminately and saying, with Valley Girl airhead intonation, "I'm progressive, because, um, I like progress?"

The audience chuckled in agreement.

That's how quickly it can turn. I went from thinking the guy actually makes some sense to knowing that I wanted to kick him in his nutsack.

This is the type of childish brainwashing which is providing fodder to millions of people embracing this tea-bag/states-rights/limit Federal Government/Give-Me-My-Country-Back movement. And unfortunately, the rank & file population can and do take it all out of proportion and decide that it's OK to skip debate and just go straight for the jugular. This is something I have seen recently in various email threads from the Don't-Tread-On-Me contingent who feel I'm a threat and a traitor to this nation because of my political beliefs and therefore should be shot.

Nevertheless, it is interesting to watch all this transpire. Sickening, but interesting.

Meanwhile, today's show has ended more than an hour ago and I have yet to be able to get in to take the quiz. I'll keep trying and will update this blog post with the result when I do.

If you have the stomach for it, the quiz is here. Just for fun, mind you!

After reading this, it reminds me of curling.
Post Author: Friðvin at 6:22 PM