As a follow-up to yesterday's post, it may be awhile before I can post my results from the quiz.

If ultra-conservatives ruled our land, is this what we could expect? 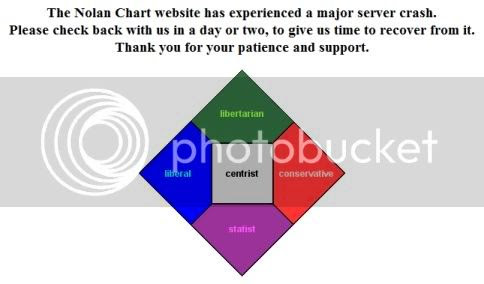 And in other mind-numbing news, my brother received this from a member of the Sheriff's department in his county. It was a reply to my brother in a chain of emails about gays in the military. Quite amusing.

I sit and read e-mails about different issues and never respond, but this one I had to. Most people who have a fighting bone in their body will side with me on the fact that gays have no place in the armed forces, or any type of job that you have to make a life or death decision in seconds. I've never been in the service but I do work for the Sheriff's office, and I have been in those situations where my life was hanging on the decision of my partner. Now who would you rather have making that choice, David Carter, 100% man, who is not afraid to pull the trigger to protect his partner or whatever else it takes to take you out of harms way, even if it means his own life. Or would you like to have someone who, because they made a choice to be gay, apparantly has a clouded judgement and cannot make a hardcore, survival, heat of the moment decision, which could cost you your life and possibly theirs. I may step on toes, so be it, but I could not put on my uniform, leave my beautiful wife and children and go to work knowing that my backup was to worried about coming out of the closet or who might find out, instead of focused on their duties. David Carter, Todd Harris, Bruce Drope, Patrick Lenderman and several others, who would go to hell and back with you or a so called man who knows what scarf goes best with a dress!!! You make the choice! GOD made it very clear where he stands on the issue of homosexuality and I stand behind him 100%!!! Leave the hardcore stuff to real men, the others, well we can always use more interior designers and dress makers.

Glad to know I'm just a "so-called" man. Wow. The extent to which these people lack a clear understanding of any given set of issues is simply astounding.
Post Author: Friðvin at 4:16 PM