Paul A. Samuelson, the first American Nobel laureate in economics and the foremost academic economist of the 20th century, died Sunday at his home in Belmont, Mass. He was 94. 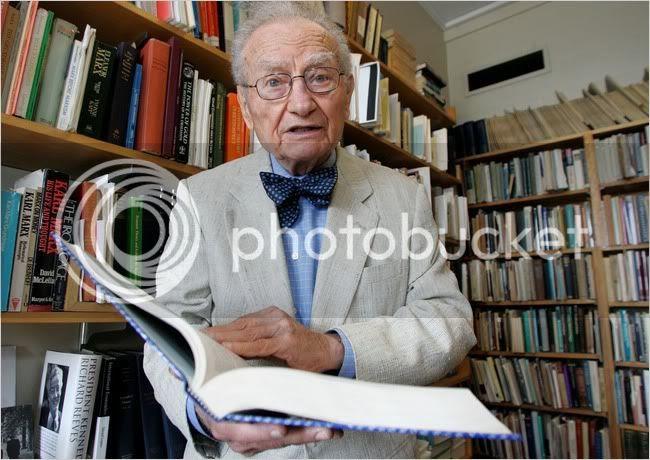 Photo credit: Robert Spencer for The New York Times
I've always been in awe of his brilliant mind. But it wasn't until I read this entire obituary that I knew just how amazing and influential he had been during the course of his long life.

When economists “sit down with a piece of paper to calculate or analyze something, you would have to say that no one was more important in providing the tools they use and the ideas that they employ than Paul Samuelson,” said Robert M. Solow, a fellow Nobel laureate and colleague of Mr. Samuelson’s at M.I.T.

Mr. Samuelson attracted a brilliant roster of economists to teach or study at the university, among them Mr. Solow as well as others who would go on to become Nobel laureates like George A. Akerlof, Robert F. Engle III, Lawrence R. Klein, Paul Krugman, Franco Modigliani, Robert C. Merton and Joseph E. Stiglitz.

Mr. Samuelson wrote one of the most widely used college textbooks in the history of American education. The book, “Economics,” first published in 1948, was the nation’s best-selling textbook for nearly 30 years. Translated into 20 languages, it was selling 50,000 copies a year a half century after it first appeared.

His most influential student was John F. Kennedy, whose first 40-minute class with Mr. Samuelson, after the 1960 election, was conducted on a rock by the beach at the family compound at Hyannis Port, Mass. Before class, there was lunch with politicians and Cambridge intellectuals aboard a yacht offshore. “I had expected a scrumptious meal,” Mr. Samuelson said. “We had franks and beans.”

I actually saw the man briefly while on a family vacation in 1973. We were visiting my aunt and uncle in Belmont and during a drive through the town, we saw him out walking and stopped for a quick chat. Even then I felt like I was seeing a celebrity!

Mr. Samuelson is survived by his second wife, Risha Clay Samuelson; six children from his first marriage: Jane Raybould, Margaret Crawford-Samuelson, William and the triplet sons, Robert, John and Paul; and 15 grandchildren. Mr. Samuelson is also survived by a brother, Robert Summers, a professor emeritus of economics at the University of Pennsylvania and father of Lawrence H. Summers, director of President Obama’s National Economic Council and former secretary of the Treasury under President Clinton and former president of Harvard.

I also had no idea his brother is the father of Lawrence Summers! Funny how interconnected things can get.

My cousin is married to one of Mr. Samuelson's surviving sons.
Post Author: Friðvin at 7:18 AM