Did Obama Flip The Finger?

I must confess, when I saw the video clip on one of the talk shows last night I said to myself, "uh-oh, that wasn't too subtle."

Yes, we've all seen people who scratch an itch with the middle finger occasionally. He scratched an itch earlier in the video using his index finger. The middle finger came out just as he was making references to Hillary being "in her element" in the Wednesday night debate. 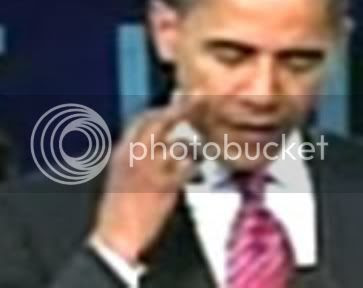 Speaking just for myself, I have flipped off politicians for most of my life. Doing it in public on camera is far riskier. It requires a certain amount of subtlety, something Obama has been able to pull off on a number of occasions during this camapaign, always with room for some doubt. But if the earlier incidents are any indication, there won't be much doubt among those with an opinion. It will have either been a blatant move on his part or a complete distortion by people looking for a shred of any impropriety.

If only he had done this a few times during the ABC debate -- directed at Charlie Gibson and George Stephanopoulos. That would have been a delight.

Be sure to read some of the comments in the LA Times Blog piece.

How dumb. It is time to require an IQ test to get to register to vote or to post a blog.
***
Wow, the comments here really show how deranged Obama supporters become when someone dares to question their Messiah.
It's a clear flip off. Obama is the left-wing Bush.
***
You're reading too much into it. Get a life!!

What the hell is a left-wing Bush anyway?
Post Author: Friðvin at 11:01 AM