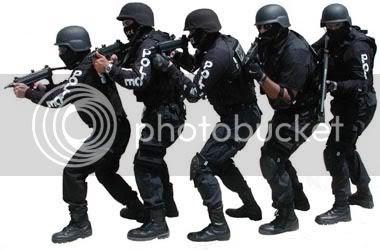 We have serious problems in the US right now which should rightly give us cause for alarm and anxiety. The worry that a SWAT team could theoretically and legally enter your home and blow you to smithereens ought not be one of our worries, but it is.

Last Thursday's issue of the weekly Arkansas Times had an article about Tracy Ingle of North Little Rock who had, shall we say, a rather nasty encounter.

No matter what Ingle or those he gave a temporary home to may have done, however, it's hard to imagine he deserved what he got Jan. 7. That night, the North Little Rock SWAT team stormed Ingle's house on a high-risk, “no-knock” search warrant. By the time all was said and done, Ingle had been shot five times — including one bullet that pulverized his femur and left his leg dangling from his body, connected only by a bloody mess of meat, skin and tendon.

According to an evidence list left at Ingle's house after the shooting, no suspected drugs or drug residue were recovered from the residence — only a digital scale, a notebook and a few plastic baggies, all of which Ingle's family members have identified as part of the junk they had collectively stored at the house.

This is why the "war on drugs" is a bad idea. And the no-knock warrant needs to go the way of Nixon: dead and fucking buried.

Conceived during the Nixon administration, the no-knock warrant — and the use of militarized Special Weapons and Tactics teams to execute them — came of age during the drug wars of the 1980s. The rationale behind no-knocks and using SWAT to serve them was simple: As the criminals became more savvy and well-armed, serving drug warrants demanded the element of surprise, and a more well-armed show of force.

The no-knock warrant is a recipe for disaster, particular in a state such as Arkansas, for an interesting reason.

Arkansas is one of many states that has enshrined some version of the Defense of Premises Doctrine in its laws. It is, simply put, the right to defend your home without fear of prosecution, up to and including killing an intruder who has made forcible entry.

It's an idea that is dangerously at odds with the concept of no-knock search warrants, says Radley Balko, senior editor of Reason magazine. A former fellow at the Cato Institute, a Washington, D.C., libertarian think tank, Balko did some of the early research into the use of no-knock warrants and militarized police units. Over and over again, Balko said, he sees cases where a SWAT team breaches a house, the homeowner exercises his right to defend his home, and either an officer or the homeowner is killed or injured. The only difference is that when it's a cop who gets shot, the private citizen nearly always winds up in jail.

This entire article is gut-wrenching and fills me with anger. And yet, Ingle doesn't hold a grudge against the two police officers who shot him, according to the article. If that's true, it's pretty amazing considering how pissed off I am after reading the article.

Email ThisBlogThis!Share to TwitterShare to FacebookShare to Pinterest
Labels: Drugs, Injustice, Police, US