Zen and the Art of Lawn Mower Maintenance 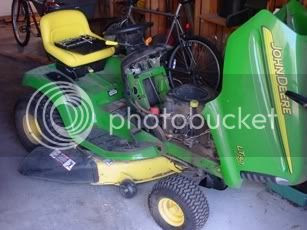 Machines have always been my nemesis. It would help of course if I'd ever had one shred of interest in learning about how they work, what makes them run, as well as various and sundry other dos and do nots.

I just spend $162 on getting two lawn mowers "repaired." $75 was just for the guy to show up, and the remainder was for services rendered. There was nothing seriously wrong. But the steps I took -- replacing the spark plug, charging the battery (well that was a step in the right direction), and cleaning the air filter -- were not enough.

Basically what it took was a few squirts of fuel into the carburetor of both mowers which apparently is like an adrenalin shot to the heart. And for some odd reason I had put almost a gallon of oil in the riding mower. I seem to recall the last time I used it I thought I had burned all the oil and I added 2 quarts. I guess that wasn't the case. Duh.

As I explained to the repair guy, my problem historically has been NOT checking or adding oil. I once burned up the engine in a 1969 Mercedes 280S because I never checked the oil while on a road trip.

What's odd is that my dad and my brother were both available when I was growing up and both were quite adept at working on motors. I had ample opportunity to learn and I preferred to sit on my ass watching television while they fixed whatever might have been wrong with my vehicle as a teen. I have paid the price ever since.

Oh well, problem now solved. Both mowers are running and I can now mow a yard that is about 2 years past due.

And some tips for those of you who might be as clueless about mowers as I am.

Check the oil before and after each use. And at the end of the mowing season be careful about adding too much fuel. You want to leave as little fuel in there as possible -- preferably none at all -- prior to storage for the winter. Disconnect the battery at the end of the season, otherwise you will probably be dealing with a shitload of corrosion on the posts and clamps come spring. Not fun either. And check the air filter often. Lots of dust can get in there and clog it up. Easy to clean. High pressure air works best, but tapping it can clear out some.

OK, that's about all I have to report today.... more tomorrow. In the meantime, enjoy this clip....


I'm in a good mood tonight. I'll give you two.