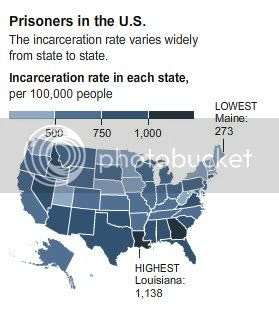 As if we needed another reminder of things needin' fixin' in this country, the NY Times ran a lengthy piece on one of my many issues today. The USA may not lead the way in the world on very much these days but we can certainly blow the rest of the world out of the game when it comes to the lock 'em up mentality.

...the United States leads the world in producing prisoners, a reflection of a relatively recent and now entirely distinctive American approach to crime and punishment. Americans are locked up for crimes — from writing bad checks to using drugs — that would rarely produce prison sentences in other countries. And in particular they are kept incarcerated far longer than prisoners in other nations.

Criminologists and legal scholars in other industrialized nations say they are mystified and appalled by the number and length of American prison sentences.

China, not exactly a bastion of human rights and progressive ideology, is a distant second to the US. And this is not simply because we have an extraordinarily higher crime rate than the rest of the world. We do have a high murder rate, helped along by easy access to firearms. But the biggest problem with our exploding prison growth is the propensity to lock up non-violent criminals for much longer periods of time than the rest of the world, and... (drum roll please)... drugs.

Efforts to combat illegal drugs play a major role in explaining long prison sentences in the United States as well. In 1980, there were about 40,000 people in American jails and prisons for drug crimes. These days, there are almost 500,000.

Those figures have drawn contempt from European critics. “The U.S. pursues the war on drugs with an ignorant fanaticism,” said Ms. Stern of King’s College.

One could argue the same motivation is in play with the war in Iraq. But yes, Ms. Stern is correct. And notice the blatant disparity between those in state prisons vs. those in federal prisons:

Another appalling fact that contributes to our numero uno prison status is the conviction of young teens who have been tried as adults -- often being sentenced to life.

In December [2006], the United Nations took up a resolution calling for the abolition of life imprisonment without the possibility of parole for children and young teenagers. The vote was 185 to 1, with the United States the lone dissenter.

Indeed, the United States stands alone in the world in convicting young adolescents as adults and sentencing them to live out their lives in prison. According to a new report, there are 73 Americans serving such sentences for crimes they committed at 13 or 14.

Why this absurd situation isn't at least in the top 7 or 8 issues in the presidential primaries is baffling to me. But I must applaud the New York Times for keeping it front-page material. In fact, today's article is one in a series.
Post Author: Friðvin at 2:27 PM

Email ThisBlogThis!Share to TwitterShare to FacebookShare to Pinterest
Labels: Drugs, Prisons, US