We have a dead tree dangerously close to our new roof. txrad scheduled a tree remover earlier this week who already postponed yesterday due to rain. They should have come yesterday because it was a pretty nice day.

Last night and this morning was another story.

Right after midnight I woke up and heard txrad stirring about the house. And I heard extremely high winds and rains. I got up and he said the back door had blown open twice.

We had been under tornado warnings during the night. I knew when I walked out in the dark to fetch the New York Times and had to dodge tree limbs that it was going to be a mess across the city.

This photo stolen from reader submissions at the Austin American Statesman reminds me of a scene I saw today as I was LEAVING work -- meaning no one had time to get out there and clean it up yet! 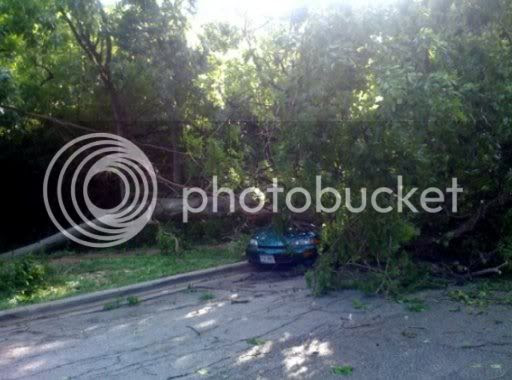 No wonder the tree service didn't keep txrad's appointment today. Meanwhile our dead tree stands. I wonder how long before we can get them out here now.

There was also a significant amount of hail in Austin, far more than at our house, and from the looks of things, the wind speed was greater in Austin as well. We got lucky. And we had a bit of clean up to do here.

txrad took care of it.
Post Author: Friðvin at 7:26 PM