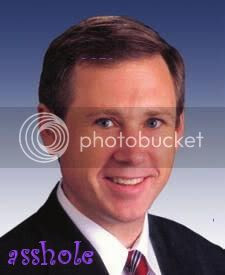 Foiled Goil, over at Big Brass Blog, did a nice pile-on of my earlier Daily Dose of Asshole post. There is also a link to the WaPo story from Mike Goldman in that post's comment thread.

Seriously, what the hell is wrong with Rep. Kirk?

In a speech at the Center for Strategic and International Studies in Washington, Kirk said he told Chinese officials "the budget numbers that the U.S. Government has put forward should not be believed."

Democratic operatives aren't letting this one go. They're fixated on Kirk's declaration that the U.S. budget numbers "should not be believed." In other words, Democrats charge, Kirk is calling his own country a liar.

"After helping get us into this current economic crisis by supporting President Bush's failed economic policies, Congressman Mark Kirk went to China and told Chinese officials that the American government was not to be trusted," says Ryan Rudominer, spokesman for the Democratic Congressional Campaign Committee. "Congressman Kirk's questioning of America while representing our government in China is incredibly irresponsible and endangers the American economy."

Is Kirk the most irresponsible person in Congress? And if not, is he striving for the title? His timing on this is not so great, as if there were ever a good time to rock that boat.