Fetch the Probe and Put Your Spurs On

We all like to complain about our fucking jobs from time to time. I may cut back on my complaints now that I realize the occupational hazards of my work are basically limited to headaches and carpel tunnel syndrome. At least I don't need to wear a condom to do my job. And it's only a figure of speech when I say my work is a pain in the ass.

"I don't think there's a problem right now," said actor, producer and director Jules Jordan. "It's like people who do stunts in Hollywood. There's a risk in anything you do."

Jordan said he does not use condoms in filming because "it takes away the whole fantasy."

And yet, I was initially amused when I saw a related piece in the Arkansas Democrat-Gazette today. It had something to do with the headline.

I'm not sure if the writer of this deserves a bonus for creativity or the boot for insensitivity:

The visuals in my mind came about instantly and instinctively. Sometimes my own warped mind makes me uncomfortable. It's my adolescent problem and I suppose I need to work on it.

In the meantime, damn those triggers! I'm now feeling kinky, and it's too damn hot in Texas for leather! 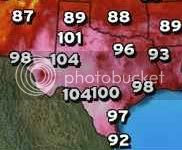 In the same paper today there was a story about a mayor in a small town who just resigned during a "probe." I didn't bother to read that piece for details.
Post Author: Friðvin at 9:33 AM