Another Thorn for the Right-Wing

Thankfully we have one breath of fresh air in the midst of the health care debacle. By a vote of 68 to 31, the Senate has confirmed Sonia Sotomayor as our next Supreme Court justice. 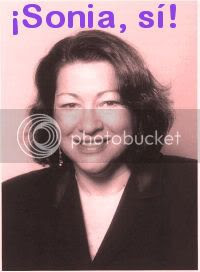 Democrats celebrated the successful nomination and relatively smooth confirmation process as a bright spot in a summer when they have been buffeted by several challenges, including rocky progress on their attempts to overhaul the nation’s health care system, President Obama’s falling approval ratings, the climbing unemployment rate and other lingering economic problems.

Shortly after the vote, President Obama said he was "deeply gratified" and confident that Judge Sotomayor would become an outstanding justice. The ideals of "justice, equality, opportunity" that guide the high court are the very ones that made the judge’s "uniquely American story" possible in the first place, the president said.

Now if we could only have such a smoothly paved road to health care reform complete and total overhaul. I'll have to get to this another day but I simply cannot fathom why we have subsidized childhood education for those who wish to use it (and private schools for those who don't), subsidized transportation networks (where toll roads aren't creeping in), subsidized fire departments, police departments, and military (coupled with the highly-successful private industry aspect). We even have subsidized health care for the elderly.

But when it comes to the working folks, or those who have been laid off, or those who are simply too poor to afford insurance, we just can't have that kind of "socialism" involved in our health care, despite the fact that we can handle "socialism" in the form of the aforementioned benefits.

I just don't get it.

This all reminds me of the push to get the US to adopt the metric system back in the 1970s. That went nowhere fast. I recall some of the same freak-outs from the right-wing back then, that the metric system was some Communist plot so that when the Russians marched in, we'd all be set to their liking and they wouldn't need conversion charts.