Robert J. Samuelson, in an op-ed piece for the Washington Post, issues a rather blistering critique of President Obama's vision for a high-speed rail network in the United States.

There's only one catch: The vision is a mirage. The costs of high-speed rail would be huge, and the public benefits meager.

In a recent report, the Government Accountability Office cited a range of construction costs, from $22 million a mile to $132 million a mile. Harvard economist Edward Glaeser figures $50 million a mile might be a plausible average. A 250-mile system would cost $12.5 billion and 10 systems, $125 billion.

Given the billions being tossed around lately, from Iraq to Afghanistan, from the US bank bailouts to the General Motors rescue, not to mention another $3+ billion in the Cash for Clunkers program, $125 billion for TEN 250-mile rail systems seems like quite a deal, and represents a fraction of the economic stimulus package which has yet to make an impact on most Americans, particularly those unemployed.

I'm certainly willing to concede that, as Mr. Samuelson asserts, we have lack-of-density issues in this country which work against the notion of a successful rail network.

What works in Europe and Asia won't in the United States. Even abroad, passenger trains are subsidized. But the subsidies are more justifiable because geography and energy policies differ.

Densities are much higher, and high densities favor rail with direct connections between heavily populated city centers and business districts.

True, but Obama isn't proposing a vast rail network along the lines of our interstate highway system. No one is talking about high-speed rail between Amarillo and Albuquerque (yet). The focus is in areas where there already is significant population density and frequent airline service between metropolitan areas -- often hourly air service! I can't imagine a scenario more worthy of frequent high-speed rail service to help ease congestion in the air and to provide quick alternatives for airline travel.

Moreover, as the population continues to climb in the US, with more people clustering in urban areas, trains are only going to make more sense as time drags on, not less. But I'll confess it does seem to be very American to wait until a need is overdue -- and even more costly years down the road -- than prepare now for what is going to be an inevitable necessity. And let us not forget the uncertainty of fuel prices which, at some point in the future, are going to start rising again.

Here is a map illustrating some of the proposed high-speed rail corridors. 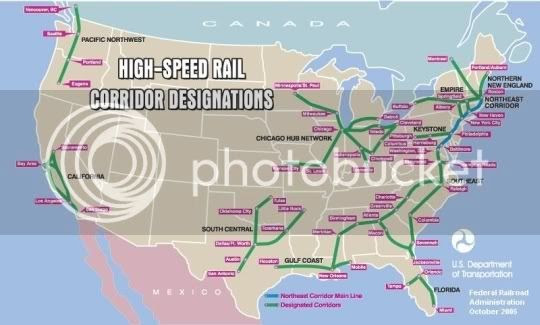 This makes perfect sense to me as a starting point. Regional rail networks would definitely help to alleviate air travel congestion where they can actually compete with airlines in total travel time. An Austin to Dallas route for example, at around 200 miles should easily be managed in less than 2 hours by high-speed rail, and be significantly more pleasurable that sitting around for 45 minutes in the airport prior to departure, and after having endured the unpleasant security aspects, had your nail clippers and large shampoo bottle confiscated, etc.

Excessive security is precisely the reason I choose not to fly except when absolutely necessary, and I haven't flown anywhere in a number of years. However, I do drive between Austin and Little Rock at least once a year, and that trip takes close to 8 hours if I hustle and keep my rest stops to a minimum. If I had the opportunity to board a high-speed train here in Austin and arrive in Little Rock in roughly five hours, I seriously doubt I'd ever make the grueling drive again.

And because that travel time is about the same as air travel when you factor in the waiting time and layover in Dallas, it would compete quite nicely.

While Texas and Florida certainly have some population density issues which beg for development of high-speed rail options, California certainly is viable.

The California High-Speed Rail Authority has a beautiful and exciting web site illustrating the vision of high-speed rail and even includes some simulated videos which are thrilling to watch. Check out a few of the "Trip Visualizations."

The time to move forward on this is now, not 30 years down the road.
Post Author: Friðvin at 3:32 PM