First, let me say I'm not thrilled at the prospect of having to pull for Arkansas Senator Blanche Lincoln in November after her victory last night in the runoff election against Lt. Gov. Bill Halter. But, the voters have spoken and made their choice. I wish Senator Lincoln the best of luck against Republican John Boozman come November. She's going to need the best and lots of it.

I am much more thrilled and excited by the outcome in the race for the 2nd Congressional District which covers central Arkansas. 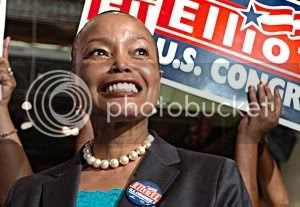 Elliott, widely regarded as part of the political left, and Wills, who has called Elliott “extreme” in her views, led a five-way Democratic race May 18, Elliott getting 30,370 votes to Wills’ 21,290, according to the uncertified results. Again, he led in seven of the eight counties, but she bested him strongly in the most populous one, Pulaski.

This race is critical because the winner will be replacing the "left-leaning" Vic Snyder. Needless to say, Elliott's Republican opponent in November calls himself a "conservative" who will be the "polar opposite" of Snyder.