Shakesville's Melissa, in her eternal quest for exposing misogyny, stumbled upon a really insidious piece of work today! I shift shit you not!

So, I guess we're meant to understand that an essentially disembodied woman's torso is also a Philips accessory that can be enjoyed anywhere, anytime...? Swell.

Too bad. I had a Philips television I really liked that I may have replaced with another one. But I guess they don't want my business. Fair enough. I'll take it elsewhere. 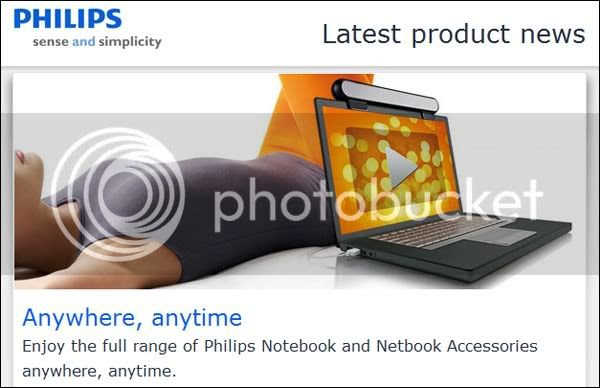 Hit the play button and her legs move!

There's a word for it... um, I think it's a woman doing yoga, an active health-conscious woman on the go, but always ready to answer an email, or Tweet. But she's essentially reduced to a disembodied torso. Oh, the horror!

You know, if that's all it took for me to get upset enough to rid myself of possessions and wage a boycott, I probably would be living in an empty house.

If that Phillips ad sets the standard for misogyny these days, you'd think violence and discrimination against women simply don't happen in any kind of blatant way.

But what do I know. This fine example of boycott-worthy advertising would have flown by me completely unnoticed had I not been alerted.

That is all. You may now resume your other daily activities.
Post Author: Friðvin at 12:55 PM