A Fine Choice of Wood Screws

As you can tell from my posts lately, I'm very disillusioned with the direction our country is going and with 62% of Americans agreeing with me, I'm in the majority...except that I seriously doubt we'd agree on the solutions.

Ever since Obama started pushing health care reform and all those on the rabid right started waving tea bags and absurd socialism signs, I've been having some fantasies. If only that man could wave that magic wand and instantly create some more socialism, above and beyond what we've already got (and upon which, the rabid right is heavily dependent).

I'm not as anti-capitalism and free enterprise as my anger lately would indicate. I rather like having a choice when it comes to the food I put in my mouth and the products I use to clean my teeth and hair. Pickles come to mind. Even when it comes to roasted peanuts, I swear I can tell a difference between the Emerald label and my local HEB label. I prefer the local HEB label, and for all I know they come off the same assembly line. I do, however, have major issues with corporate giants gobbling up small producers under their umbrella, all in the name of market share, corporate profits, and pleasing their shareholders.

I think we would could stand to benefit from breaking a few old habits and doing some taste tests and perhaps we could start to wean ourselves away from branded items owned by the likes of P&G, Kraft, PepsiCo, Unilever, and others that are "too big to fail." You know, the shit you think is the best only because you've seen it advertised on television six thousand times vs. the store brand which might cost 20% less but you've never seen it advertised, and therefore it doesn't have that cache of a major corporate label behind it.

As much as I love having choices, there are clearly situations where I have them and honestly don't give a shit. I'm not sure I need 35 different olive oil choices, but since it is a food item, I sure wouldn't want to deprive another person of their personal joy. And besides, some of those labels are small producers, not corporate behemoths, and we need more of those.

When was the last time you went to buy nails at Home Depot and were confronted with a choice between 6 or 7 different manufacturers? And did that lack of selection bother you? Nails are important, as are wood screws. They kinda sorta hold our houses together. But you don't see ads in magazines, or on TV, for either nails or wood screws. And what's out there must be pretty damn good because I've never taken either purchase back for a refund, or driven around to see if Ace sells the same brand as Home Depot. Nor has my house caved in on me. Or the last house, for that matter. Most of us don't much care, nor should we. If it's a quality product, we're happy. If it's not, word will soon spread and another manufacturer will step in to fill the gap.

Another area where I honestly could care less is in the fuel industry. I think we'd be better off if the state owned oil & gas production in the country. Aside from when I was young and using my dad's Conoco credit card, I've never sought out a particular brand of fuel. I've used it all: Exxon/Mobile (before the gay boycott thing started), Texaco, Chevron, BP, Phillips 66, Valero, you name it, I've used it. And you know what? Despite all the pissing contests between them with boasts of Techron, and other bullshit, I can't tell a difference, and I drive a performance sports sedan. I've driven a Honda Civic and I've driven a beat up Toyota Corolla. And not once have I ever said, "Ummm, I'm running on empty but I'm going to pass on that Texaco because there's a Chevron six miles up the road and my baby is jonesin' for some Techron."

I do not care what I put in my car. Call it Amerigo, make it a state-owned monopoly, and you won't get anything but a loud cheer from me. The wasted money on advertising, the corporate executives and shareholders of one fuel company trying to gain market share over another, the mergers and acquisitions in an effort to be numero uno, would all disappear. And good riddance to it. If my car runs, I'm happy. And I think it's safe to say, after the BP disaster, not only do we need to move away from that source sooner rather than later, their interests in alternatives are purely self-serving.

Another area I wouldn't be the least bit sorry to see disappear is the competition in the cell phone arena. Good fucking grief! I remember when I came back from London in 1984 and suddenly the telecommunications industry had been deregulated. I needed to call my parents from a pay phone and had to make a choice of which corporate carrier was going to handle my long-distance call. I didn't give a flying fuck then, and I sure as shit don't give a flying fuck now. "You're using Sprint? Uggh, dude, AT&T is the only way to go...more bars in more places you know?"

Fuck that noise. I have AT&T on my cell phones here in Austin. I keep it because I have my mother on my plan and she lives in southeast Arkansas. I used to have Virgin Mobile and on a trip to my mom's back about 8 or 9 years ago, I didn't have phone service for like 500 miles, including the entire time I was at her house.

Sheldon took his phone to North Dakota this month and had spotty service at best. Maybe Verizon would be better up there. But maybe down here in this valley where we live, Verizon wouldn't work at all, and maybe at my mom's house it would be the best of all. Who knows and who cares, and who wants to spend the time and money trying to figure out which provider is going to handle you best in all the places you need to visit.

Honestly, when I'm on the phone with someone, not once have I ever been able to figure out whether they are using Sprint, Verizon, AT&T or whatever. It doesn't matter! What we want is good service, good bars, and access across the nation. And maybe Canada. The state can seize that industry for all I care, invest in one universal comprehensive area of coverage, we're all on the same network, all one big Amerizon family plan. Easy. Less choices to stress about. Less advertising and competition and pissing contests and unhappy shareholders and executives shitting their britches over market share after dropping from #2 to #3. 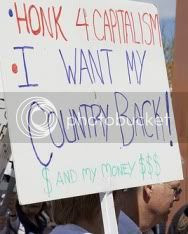 And let's throw the banking industry in here while we're at it. Give me one national bank owned by the government with decent interest rates and tellers who are happy because they are paid well since they aren't competing with shareholders demanding dividends and rising stock prices, and have free government health care. Better yet, give me that option and the option to stay with my credit union. Credit unions vs. a national state-owned bank. Fair enough. Stop the gouging with check fees and ATM fees. A check is a check and it moves through the system with ease regardless of whether it's a Chase, Bank of America, or Wells Fargo check. At the very least, regulate the banks, break the behemoths up into regional banks.

I could live without a choice of airlines as well. But then I never fly so I'll spare you my diatribe on that industry. If I needed to fly from Austin to Little Rock, I'd be stopping in either Dallas or Houston regardless of whether I chose Delta, Continental, American, or Southwest, and the fares and taxes are all about the same, so why do I care? It's competitive clutter. Take some of those profits and bonuses going to executives and share it with the underpaid pilots and stewards! How 'bout that?

In my utopian dreamworld of the Evil Socialist Obama, I would drool at the prospect of eliminating the corporations that control our television, radio and newspapers. Allowing corporate conglomerates to monopolize the local media was one of the biggest mistakes ever perpetrated upon an ignorant populace. Why did we stand for this? Why does Clear Channel, based in San Antonio, need to own six radio stations in Memphis and another 850 stations elsewhere? (They also own six stations in the small market of Bismarck, North Dakota!) Oh, stupid me: money for executives and shareholders, and the ease of production-line programming so they can inflict the same stinking pile of overplayed songs on EVERYBODY. Sorry, I took a momentary leave of my senses. Who cares what people in Bismarck or Memphis want to hear? Feed them what they think they need and they'll never know the difference. Most of them are too young to remember real rebel radio anyway. You know, stations with DJs who could get a wild hare up their ass and decide to play Thick as a Brick in its entirety. That was back when radio was actually exciting and unpredictable. 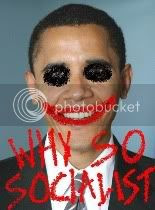 I just get so annoyed with the ridiculous portrayals by the right of President Obama and his "road to socialism." I could show them what a real socialist looks like. 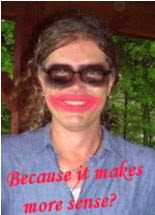