I've been a "member" and carried a "Card" from a certain credit card company since 1983. That dates back to when I was a status symbol-obsessed youth. Since that time I have been accruing points on every purchase and never used them. I treat it like a savings account of sorts. If I ever wanted to take a free trip, the points are there. I had about 328,000 points as of this morning. That's good for quite a few trips! Too bad I never fly. I don't even like to be in close proximity to an airport.

Several years ago, probably more like 12 or 15, I was "invited" to upgrade to a Platinum card. This was before every other institution began issuing Platinum VISA cards out the ying-yang. I felt like I was part of an elite class; I felt special. Now I just feel rather stupid for playing along.

I've toyed with the idea of dumping the Card for the past couple of years. By the time I hit the bottom financially in early January I had decided to cancel my membership in this elite club when my next membership fee comes due in September. I already cancelled txrad's card in February.

Keep in mind, this Platinum card isn't cheap. It does come with some nice amenities for those with the finances to use them. A free companion ticket on certain overseas flights for business and first class flights is quite a perk. One such trip a year would offset the $395 annual membership fee for several years. But how many such trips have I taken? Zero.

After I found lucrative work again at the end of January, and txrad began working again last week, it had crossed my mind that perhaps I could hang on to my beloved Card now. I don't know why I have this completely irrational emotional attachment to a piece of plastic, and the tyrants behind it. (Ever been late with a payment to those folks?)

A letter I received this week from the Centurion has sealed the decision. I may have a job, and life may be grand again, but I have not forgotten how easy it is for situations to change, to go from rolling in the dough one day to wondering how we're going to feed the cats a week later. I'm enjoying being frugal, and honestly, I got over the Platinum status symbol honeymoon at least a decade ago.

The Centurion has informed me that my membership fee will be increasing to $450 this year. Umm, no it won't. And so, the Centurion has forced me to begin a shopping spree. Now I'm having fun.

This Creative Zen Vision:M 30 GB MP3 and Video Player is on the way. And yes, in GREEN. Why the hell not? I'm Irish! And I can start doing a Friday Random 10. 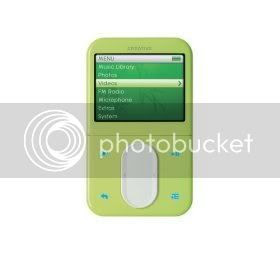