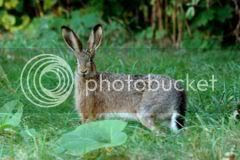 Imagine a world in which this is the worst news of the day.

Normally a shy animal, the European Brown Hare changes its behaviour in spring, when hares can be seen in broad daylight chasing one another around meadows; this appears to be competition between males to attain dominance (and hence more access to breeding females). During this spring frenzy, hares can be seen "boxing"; one hare striking another with its paws. For a long time it had been thought that this was more inter-male competition, but closer observation has revealed that it is usually a female hitting a male; either to show that she is not yet quite ready to mate, or as a test of his determination.

A test of his determination? Jesus. Sounds rather S&M-ish. "Slap me one more time and I'll screw your brains out."

Ahhh, the simple pleasures of the animal kingdom.

Email ThisBlogThis!Share to TwitterShare to FacebookShare to Pinterest
Labels: Bizarre, Europe, Humor, Whatever