Poll: Most Americans Can't Find Their Own Assholes

And many of those don't even vote. But, I don’t get this. Can someone explain it to me? Explain how "voters think McCain is better suited to handle Iraq" than Obama?

The public's stance on the war is as equivocal as McCain's is not: A strong majority of Americans oppose it and believe it was wrong in the first place, but more find McCain better suited to handle Iraq than his Democratic presidential rival, Barack Obama.

"He's more experienced militarily," said Ann Burkes, a registered Democrat and retired third-grade teacher from Broken Arrow, Okla. "And I don't know if I agree with stay-the-course (policy), but I think the good probably outweighs the bad with him, experience-wise."

Gee, do we want out or not? Can we make up our fucking minds? 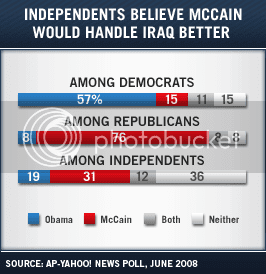 Here's the deal: 55% of independents don't think McCain is better. And another 12% think both candidates could deal with Iraq effectively. So that's 67% who would not agree with the statement that McCain is clearly better able to handle Iraq.

Among Democrats, it's 72% who don't think McCain is better, and a total of 83% who would disagree with the statement that McCain is clearly better able to handle Iraq.

And does anybody really give a whirling rat's ass what Republicans think? Let's go there anyway. 16% don't believe McCain is better. And a total of 24% of Republicans -- nearly 1 in 4 -- would apparently, based on my interpretation of this poll, disagree that McCain alone is the best of the two in handling Iraq.

So, where in the name of hell did they come up with the title of the article linked at the beginning of this post?

It seems to me, that should read, "Some voters...." and yes, we already know that some voters are eternally stupid, blind in their allegiance, and honestly, probably just not paying close attention. And this bit just really has me in a tizzy:

For McCain, there is a major complication. Not all those voters who perceive him as stronger on Iraq say they will vote for him for president.

McCain has a bigger complication. Even if all those voters DID vote for him for president, it shouldn't matter. He should still lose. McCain has two major complications: McCain, and the Republican Party.

Screw them both. And screw stupid polls. Screw Yahoo and screw the AP.

Did I leave anyone out to screw who deserves it?
Post Author: Friðvin at 4:47 PM