Ahhh yes. It's that favorite day of the year for retailers and those people just crazy enough to get up at 4:00 in the morning to go shopping, and those apparently are the lazy ones.

At the Best Buy store in Syracuse, N.Y., a line snaked past stores and around walkways on the second floor of Carousel Center a few moments before the store's 5 a.m. opening — about eight hours after some people near the front of the line had arrived.

This woman apparently has a towel fetish. 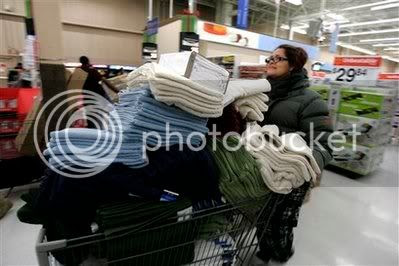 And there has already been a shopping frenzy casualty -- at a Wal-Mart naturally.

A worker died after being trampled by a throng of unruly shoppers when a suburban Wal-Mart opened for the holiday sales rush Friday, authorities said.

At least three other people were injured.

Wow. That just makes me want to hug a flag and sing God Bless America.
Post Author: Friðvin at 10:58 AM