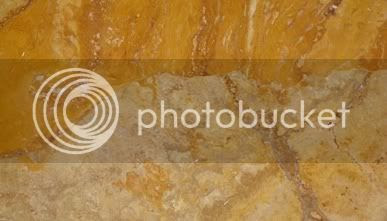 A decision has been made on the flooring project. We are going for the gold! I just really like the vibe being generated by the vein cut travertine as opposed to the traditional cross cut in which the veins are literally just that. Cutting to expose the veins makes for some added interesting features.

After having 7 or 8 various travertine tile samples in the house for at least a week, I think it's a good sign when my attraction to one actually increases over that time while my enthusiasm for the others diminished. My gut instinct before we started this was that I wanted some red tones in the kitchen. But once I had a few samples on the floor, they just did not spring to life like the yellows & golds. And the walls in our den and foyer are green and the contrast between those colors and the red tones made it feel like we were decorating for Christmas, but permanently.

However many thousand pounds of that rock will be delivered as early as Tuesday and then the fun begins. We'll have vinyl being ripped up in the kitchen, and tiles being demolished in the foyer. Expect blogging with pictures!
Post Author: Friðvin at 7:00 PM