And I took my sweet time about it. 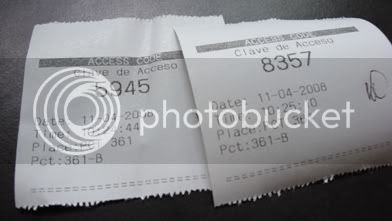 It was in the 2000 election in which I bypassed the presidential vote in order to vote for all the other candidates and my intention was to vote for Al Gore last so I could savor the moment before I cast my ballot. By the time I got to the end, I was so eager to cast it I completely forgot I hadn't voted for president. That will never happen again. This time I didn't even notice who else was running for leader of the free world.

Today I stared at the summary screen showing my votes, scrutinizing it to be sure I voted. Then before I cast my ballot I scanned it again and just stared at my vote for president for a few seconds to relish the moment. My hands were clammy and I literally had chills across my body. And then I pressed the red button and walked away.

I voted for a man named Barack Hussein Obama. Imagine that. My mother believes he is immediately going to begin destroying our nation.
Post Author: Friðvin at 10:42 AM

Email ThisBlogThis!Share to TwitterShare to FacebookShare to Pinterest
Labels: 2008, Politics