I guess I won't be going to the Lone Star Curling Club on Sunday after all. The last thing I need right now is to fall on my face again, although I do need to keep it on ice. Keep ice on it gently. 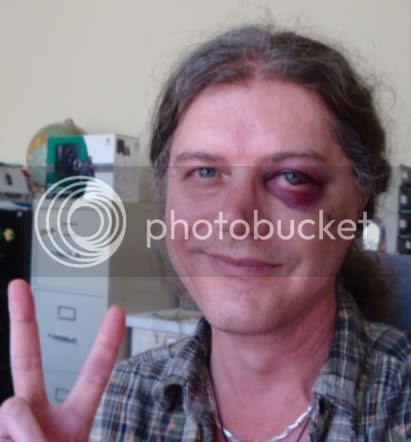 It is amazing how quickly your life can be turned upside down by one bad mistake. Monday night I was discussing with txrad how excited I was to be going back out to the curling club open house on Sunday to throw a rock or two.

We were making dinner and doing tequila shots, as usual. Shortly after dinner I walked out the back door and one second later I remember the extreme impact of my face against concrete. I distinctly heard the multiple snapping of bones.

I pulled myself up and went to the bathroom to survey the damage. Blood was running down the left side of my face. txrad was watching TV and had no idea this had happened. I was so annoyed with myself I decided to save the news for morning. I washed away the blood, applied some arnica gel to help with the bruising and swelling, and went to bed.

It was not a very good night. At some point I awoke, hoping that the memory had been a dream, but knew from my pain that it wasn't. I had busted my shit up real good.

txrad called and scheduled an appointment with a doctor yesterday morning at 10:30. The doctor referred me to another clinic where they do the CT scans. I had that done on my face and brain this morning.

The doctor wanted me to make an appointment with the surgeon as soon as possible but unfortunately the surgeon's office is closed on Wednesdays. Great.

Tomorrow I should be able to get in there, with any luck, and get a fuller assessment of what I'm in for this month.

This is by far the worst injury I've ever had in my life, and will be the first time I've ever needed surgery. Lots of people have had to undergo similar procedures. People have horrific car accidents, some people engage in extreme sporting activities during which time, an accident can lead to broken bones and smashed faces.

During the Olympics I would cringe when hearing about an athlete who was competing again after x number of surgical procedures to correct this and that. And this is one reason why I would never have made a decision in life to become a race car driver, or a skier, etc. Do it long enough and sooner or later something bad can happen.

My friends, as I know now, it's really no different with irresponsible drinking. Do it long enough and sooner or later something bad can happen. I can't tell you how many times I've been en route to a liquor store and mumbling to myself that "nothing good can come of this."

And even though you know you need to clean up your life, doing so is always just one tomorrow away. Well, welcome to tomorrow.

I should be completely freaked out at the prospect of surgery. Part of me is a little anxious about it. Part of me is angry with myself and I could also sit here and continually kick myself mentally for being so stupid and irresponsible Monday night but that's not productive either. You can't change the past, as much as you might like to rewind and redo.

The biggest part of me is more focused on cleaning myself up to make sure this never happens again in the future. I'm no longer agitated about leaving my 40s behind in about 7 weeks when I turn 50. No big deal. Something about pain and the idea of facial surgery makes birthday milestones inconsequential.

The joys of still being a 40-something ended around 9PM Monday night. The time between now and my actual 50th birthday will be about nothing but recovery and progress, and living my life as a 50-something quite differently from how I lived my life as a 40-something. Time to grow up and enjoy middle-age.

The real irony here is that I was looking forward to the first week of March passing without any incidents. It was two years ago this week when I was dealing with a very similar situation with txrad, and I was ready for that 2-year anniversary to come and go. But here we are in a role-reversal. I guess the score is even now.

That post two years ago ended with this question: "Have we learned anything yet?"

I love tequila but let's call it a tie game and forget overtime.

I love my face, my bones, and my health & well-being far more. And I love txrad. All of those things are far more important to me than any reposado or añejo.

I'm just not sure why it took an event such as this (or these) to make me put things in perspective. I never thought of myself as being one that couldn't ascend until I figured out where the bottom was.