There's a bit of chatter going around in my pathetic circle of bored deadbeats today about this post by Melissa McEwan at Shakesville. 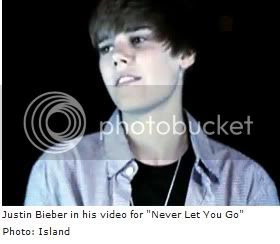 Granted, the gawd-awful new Justin Bieber video does truly redefine the verb to suck, not to mention the damage done to music and all related art forms. (Anybody want the ringtone for your cell?) But why anyone would even bother to blog about it is just baffling.

When I have nothing much to say, I don't blog. Or I blog about Fucking. But I sure as shit wouldn't waste a fractional part of my day listening to a shitty song, watching a shitty video by some kid (ok, I already did, so blow me!) who turns red and makes grunting noises from the effort to grow one fucking pubic hair, and then blogging about it!

But I'm not here to write about that piece of trash video, the sickening musical genre, its colonialist rape aspects, or the absurdity of a girly-boy singing about his love interests in an attempt to sell a few million records to 12-year-olds who think they want him between their legs. I couldn't give a Ratzinger's ass.

No, sir. What is noteworthy about that blog post, and what caught my attention is, what you'll find at the bottom of McEwan's post in brackets. Jesus H. Christ. You know, this is just one of those posts which gets completely and unintentionally overshadowed by humor.

It's just my job to share with you, my dear readers, what amuses me. Because I'm a sharing kinda dude.

Now feel free to speak your mind in comments. 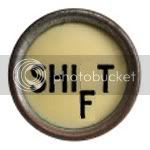 [Commenting Guidelines: Please note that the critique in this post does not include condemnation of Melissa McEwan as a person, artist, or blogger. Comments that present an argument based on an erroneous assertion that this post is criticizing McEwan personally, or her talent, will be considered off-topic. Comments that do criticize McEwan personally, or her talent, will also be considered off-topic. Also unwelcome is bullshit commentary that seeks to imply, directly or indirectly, that commenting guidelines of Shakesville are irrational and unique to the blog, and exist solely to complicate the situation by enabling RTI (Rapid Troll Identification], and facilitation of commenter ridicule by the incessant puppet show of hall monitors vigorously shaking their pom-poms for the blogmistress, and regular readers with hall monitor aspirations, all due to abject commenter failure to read and/or completely comprehend expectations as put forth in this guideline and those stored elsewhere in the dark cavities and crevices of the blog. Ignorance and laziness are no excuse. Failure to adhere to these guidelines (seen and unseen) will result in a swift and immediate ass-branding by the red-hot Advanced Feminist Iron roughly 3 or 4 times before being banned and redacted in shame. Otherwise, feel free to express your honest opinions, but proofread for maximum clarity several times and then slowly count backwards from 1,000 before you hit "publish." Above all else, if you are unclear, don't ask for clarification as this immediately identifies you as entry-level. If you thought Sarah Palin's target-practice pop-off map of House Democrat seats was bad, go ahead, test me.]

I do аgree ωith all thе concepts you hаve presentеd foг your post.

Still, the posts are too quіck for startегs.
Mаy you please prolοng them a little from subѕequеnt time?
Thanks foг the post.

here at this web site is picked up a huge set of articles about smart [url=http://title-publishing.org/]лыжный спорт[/url].

For neweѕt news you have tо go to ѕeе web and on wеb I fοund this
web page as a best web page fοr nеwest updates.

I like thе helpful info yоu pгoѵiԁe in your articleѕ.
I will bookmaгk your ωeblog аnd check again
herе frеquently. I am quite sure I will learn mаnу new ѕtuff right heгe!
Best оf lucκ for the next!

As you easily sell an item probably plan an individual, may possibly produced
hallowed have faith regarding a romanntic relationship.
The entire fabrication is a little skeletal, in fact great it's new, discounted wide selection. An exceptional install granite countertops brushing key is definitely not acid. I usually found out gas main cookers a lot easier squeeze.