Pelosi DID Have the Votes!

Finally, on Sunday, the House passed health care reform! The historic vote was 219-212.

It's very clear who the assholes are, and their constituents need to show them the exit.

Let's start with Boehner. I've been completely fed up and disgusted lately with him and his ilk spewing nonsense.

The House Republican leader, Representative John A. Boehner of Ohio, said lawmakers were defying the wishes of their constituents. “The American people are angry,” Mr. Boehner said. “This body moves forward against their will. Shame on us.”

Sorry, dude. Do you mind if I call you dude? You got it all wrong. You represent a district in Ohio, not the nation as a whole, and whether or not your agenda truly reflects your constituents, or just your well-to-do, white right-wing Republican constituents, remains to be seen.

If you look at the map of voting patterns by members of the House, it would seem to me that a slim majority did indeed follow the wishes of their constituents: the left coast, New England, more lefty segments of the midwest, the independent progressive areas of the Southwest, and some impoverished areas of the Deep South where people most definitely should benefit from this reform measure.

So, in short, Rep. Boehner, with all due respect, blow your inaccurate statement right out your ass. And there are quite a few of your esteemed colleagues I'd like to see packing their shit up in boxes.

Representative Lincoln Diaz-Balart, Republican of Florida, called it “a decisive step in the weakening of the United States.”

Representative Virginia Foxx, Republican of North Carolina, said it was “one of the most offensive pieces of social engineering legislation in the history of the United States.”

Bullshit. Enough of these tea-baggeresque inaccurate theatrics. Without a doubt, these selfish, hypocritical, reprehensible stink bombs who pass themselves off as leaders will continue their fight against fairness and compassion for millions of Americans who struggle daily against a corrupt system favoring huge profits for executives and shareholders at the expense of Americans in dire need.

I sincerely hope they pay a price at the polls someday.

The legislation is far from perfect, and frankly I am embarrassed that this is the best the United States of America can do right now, with the slimmest of margins. However, the alternative would have been unthinkable and far worse. At least now we have a door wedged open which will allow us, in the future, to improve upon what we now have, to reap the harvests of what's right about it, and to repair what is still broken, such as the outrageous hardships imposed on women who want or need an abortion.

Despite my embarrassment that this is the best we could do after such a long hard slog over the past year, I will still take it with pride that we are moving forward again.

It is a rare day when I can say this, but I am very proud of President Obama and especially Nancy Pelosi today. I am proud of the 219 Democrats (well, most of them. Stupak is still a jerk.) who voted to send this important legislation to the President's desk.

Feeling good about the direction of America is such a rare event, I feel as if I'm dreaming. 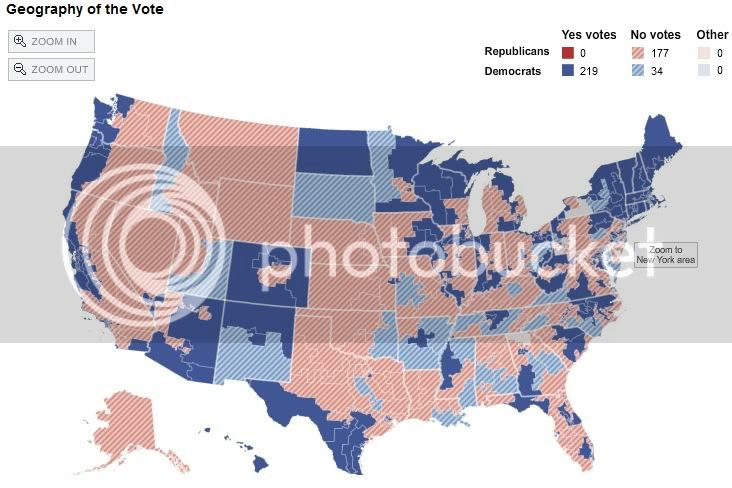 Click the map to visit the New York Times Interactive Map of Votes.

Lastly, I'd like to give a special shout-out to Representatives Mike Ross and particularly Marion "Good Riddance" Berry, both Arkansas Democrats. Rep. Berry was initially on this NYT map yesterday as a yes vote and somehow turned into a no vote. Given that Rep. Berry represents a huge swath of the poverty-ridden Mississippi Delta in eastern Arkansas, this is a shameful vote. "Good riddance" indeed. Both of those votes should have mirrored District 2 which you'll notice on the map in western Mississippi. Kudos to Bennie Thompson of that state for actually showing some guts and rational leadership. You made a Delta boy proud.

Marion Berry's pathetic spineless excuse? That the anti-abortion provisions of the bill don't go far enough. So, it's better to continue punishing children born into poverty without access to health care. Nice going, prick.
Post Author: Friðvin at 6:12 AM

Email ThisBlogThis!Share to TwitterShare to FacebookShare to Pinterest
Labels: Bullshit, Haves vs. Have Nots, Health, Politics