Health Care System Diary: Part 1 of God Only Knows How Many

I want to document my experience with the American health care system to determine if there really isn't a better way for us to do things in this country which might result in more efficiency, less hassle for those who need care, and at a lower cost.

Tuesday morning was my first doctor's appointment after my fall on Monday night. That wasn't bad. After waiting perhaps 20 minutes after my 10:30 appointment I was taken to a room to be weighed and have my temperature taken, and then into another examination room where the nurse took my blood pressure, asked me a few questions and then told me the doctor would see me in a few minutes.

I might have waited 10 minutes before the doctor arrived. Not bad at all. He examined my face, asked me a number of other questions, and then told me the name of a surgeon he would recommend who specializes in the type of bone work I would need in my face, and who could do the x-rays. He did mention that the surgeon's office does not take my insurance plan but that I could be reimbursed for the expenses by my insurance provider. That raised a red flag or two.

As I was preparing to leave, his nurse brought me some paperwork detailing the scans I would need of my brain and face, an office of the Austin Radiological Association about 6 miles away, and they would take my insurance. So I assumed this visit was in lieu of going to see the surgeon right away. They were able to schedule our appointment for 8:30 Wednesday morning.

I got there, filled out another pack of forms containing repetitive information from forms in the same pack as well as from forms completed the prior day at the doctor's office (which also asked for repetitive information). After about 20 minutes of waiting I was directed back to the room with the big scanning device. That series of scans took maybe 15 minutes and then I was free to go.

As soon as I got home, my doctor called me and asked if I'd picked up a disk of the scans. I hadn't. He asked me if I'd made an appointment to see the surgeon. I hadn't. He told me to go get the disc of the scans so I sent txrad to fetch them and drop them off at the doctor's office. Unfortunately the doctor didn't mention that they weren't for him. I was a tad curious when on the phone with him because it was obvious he had already seen the images. He had in-depth knowledge of my fractures!

This was Wednesday morning, and of course when I called the surgeon's office, I got a message saying their hours are Mondays, Tuesdays, Thursdays, and Fridays. I'd have to wait another day.

I called this morning, hoping to be able to get in today but they can't see me until Friday at 12:30. Also they mentioned that the exam and x-ray would be out-of-pocket since they do not accept the insurance plan I have which is provided by my employer.

I asked them if I'd really need the x-ray if I'd had the CT scan done, and they said, "oh, if you have that then we just need you to bring the disc of that scan." Then it hit me: Sheldon had dropped the disc off at my doctor's office because the doctor didn't clearly state that it would be needed by the surgeon I would be seeing.

So off we went this afternoon back to the doctor's office to fetch the disc. The nurse couldn't find it but said I could walk to the hospital next door because there is an Austin Radiological Facility in there, and they could pull up the scan and make me a copy of the disc. Great!

We walked over and the desk clerk seemed very confused about where I'd had the scan. She finally figured out that it was an ARA facility not affiliated with the Seton hospital where I was currently trying to retrieve a copy, and because that facility was not a Seton facility, she could not access the data to make a copy.

We walked back over to the doctor's office and waited for the nurse. Fortunately, she produced the CD within a matter of seconds and we were on our way.

Quite a bit of small inconveniences and miscommunication but nothing too severe. Annoying, but hey. Not a dime out-of-pocket so far! :-)

But the big question remains: What about this situation where the surgeon's office doesn't take my insurance? An office visit out-of-pocket is one thing. Facial repair surgery is quite another.

Damn, what a fine system we have in this country. Who needs any kind of reform?

Meanwhile, I got to see an image of my brain on my own computer today from that disc we picked up. 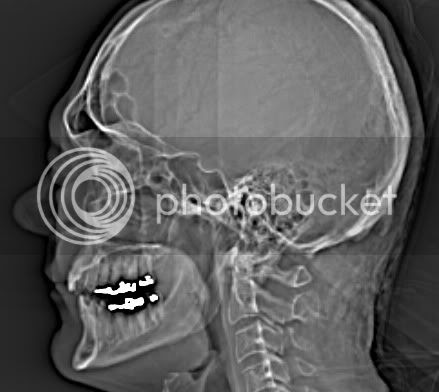 Damn I have a lot of metal in my mouth! But just a lot of gray matter upstairs.
Post Author: Friðvin at 7:00 PM

Email ThisBlogThis!Share to TwitterShare to FacebookShare to Pinterest
Labels: Diary of a Health Care System