I knew this was coming after I read about efforts underway to ban magic mushrooms in Holland. 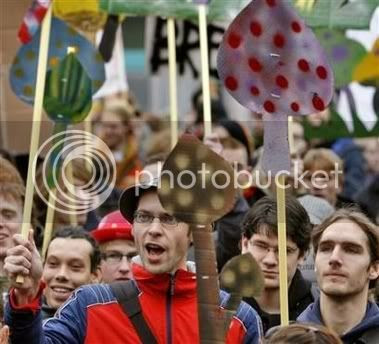 "Boss of your own brain." I like that one!

Education and information can go a long way.

Meanwhile, on a far less humorous note, read this and ask yourself what the hell is wrong with our nation! This is how we treat our ill people... by harassing them to death.

She was a high-profile campaigner for the Montana Medical Marijuana Act, and like others, she was dismayed when the U.S. Supreme Court ruled that drug agents could still arrest sick people using marijuana, even in states that legalized its use.

The ruling came to haunt Prosser in late March, when DEA agents seized less than a half ounce of marijuana sent to her by her registered caregiver in Flathead County.

At the time, the DEA special agent in charge of the Rocky Mountain Field Division said federal agents were “protecting people from their own state laws” by seizing such shipments.

Great! Just what we need in America: federal agents "protecting" us from ourselves.

Jesus H. I hear the unmistakable sound of the Nazi lock-step.
Post Author: Friðvin at 9:49 AM

Email ThisBlogThis!Share to TwitterShare to FacebookShare to Pinterest
Labels: 'Shrooms, Europe, Marijuana, Rules and Regulations, US