The Anxiety of Another Week

Good morning, boys and girls! Are we all ready for another fun-filled action-packed week leading up to the VP debate on Thursday night?

Wachovia can disappear now after being absorbed by Citigroup.

Citigroup will pay $1 a share, or about $2.2 billion, according to people briefed on the deal.

The F.D.I.C. said that the agency would absorb losses from Wachovia above $42 billion and that it would receive $12 billion in preferred stock and warrants from Citigroup in return for assuming that risk.

“Wachovia did not fail,” the F.D.I.C. said, “rather it is to be acquired by Citigroup Inc. on an open-bank basis with assistance from the F.D.I.C.”

No, of course they did not "fail." Being bought out for $1 a share seems pretty damn close to me.

The sale would further concentrate Americans’ bank deposits in the hands of just three banks: Bank of America, JPMorgan Chase and Citigroup. Together, those three would be so large that they would dominate the industry, with unrivaled power to set prices for their loans and services.

If this keeps up we're going to experience the Starbucks syndrome in the banking industry. Hmmmm, decisions, decisions. Do I go to the BofA here or the one across the street?

President What's His Name, addressing a few squirrels on the White House lawn on Sunday, urged a quick passage of the bailout rescue package. 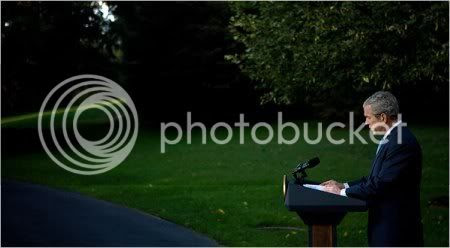 Meanwhile the quote of the day goes to Senator Judd Gregg of New Hampshire, the senior Republican on the Budget Committee and the lead Senate negotiator:

“If we don’t pass it, we shouldn’t be a Congress.”
And if you do pass it you might not be in Congress much longer.
Post Author: Friðvin at 8:44 AM