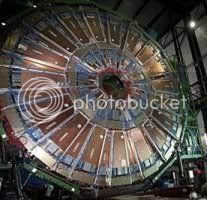 We didn't get sucked into the black hole!

The world's largest particle collider passed its first major tests by firing two beams of protons in opposite directions around a 17-mile (27-kilometer) underground ring Wednesday in what scientists hope is the next great step to understanding the makeup of the universe.

The start of the collider came over the objections of some who feared the collision of protons could eventually imperil the Earth by creating micro-black holes, subatomic versions of collapsed stars whose gravity is so strong they can suck in planets and other stars.

Whew! Glad we got that major source of anxiety out of the way. Now we can relax, right?