One Toke Over The Line 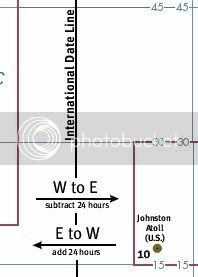 I probably have an unhealthy infatuation with the International Date Line. I spend too much time contemplating it and trying to wrap my mind around the concept of a fixed imaginary line in which it's always a day later just a step (albeit on water) to the west. I am not alone.

Certainly as the world turns there are moving imaginary lines where once a day it's going to be Thursday in Detroit and Wednesday in Chicago. I have no trouble with that concept.

I think it would be a hoot to get really stoned on some good Jamaican shit and straddle the date line, especially around 11:59 PM as the floating line overlays the static one.

The date line passes between Russia and Alaska through the Bering Strait. So as Sarah Palin might stand there monitoring the goings on with her vile neighbor to the west, I wonder if she's ever considered it to also be staring into the future. Where she would stand it might be Monday. On that big chunk of tundra across the strait, it's Tuesday. She might even see something happening over there on Tuesday which we need to know about in the interests of national security, and give us a day's advance notice, right? We need such a woman in the White House!

It doesn't seem fair to me that the date line is isolated out there in the Pacific. It would be way more fun if we were to move it someplace where more people could interact with it on a regular basis. How about right through the middle of the North American continent?

In fact, it would be hilarious to move it so it divides the Dallas/Ft. Worth airport. That would give added excitement to air travel. 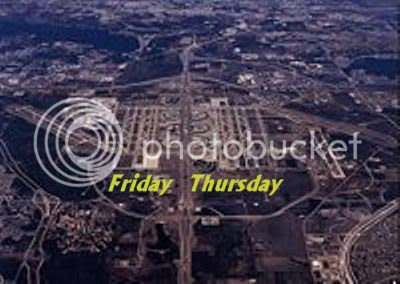 Travelers entering DFW from the north onto the south-bound roadway and destined for a terminal on the east side of the airport would say, "Oh hell. We just missed our flight by 23 hours. But if we hurry and loop around we can still catch it."

Wouldn't that just be a scream?

Seriously, have I nothing better to do with my time?
Post Author: Friðvin at 10:02 AM