A Day for the Working Citizens

Unfortunately, konagod has been laboring in the office. But not doing real office duties, just rearranging the space after having this on my agenda for over a month.

I can hardly contain my excitement. This was the old setup when I was in transition between the old job and the one I started in July -- hence, 3 monitors on my desk, and another one on that table to the right which I was cleaning up to donate. (Yes Vincent, I did remove the hard drive finally.)

Also notice the odd placement of the filing cabinet in the foreground which was a dumping ground for junk. You'll see what I did with that to better utilize space in an upcoming photo. 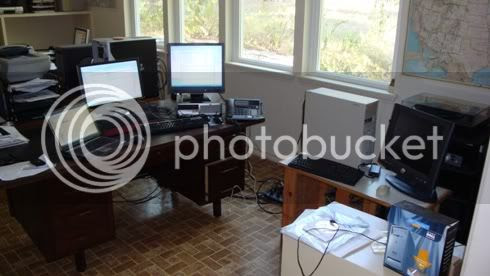 A bigger view of the old arrangement with txrad's desk at the back. Lots of clutter with lots of computer wires on the floor behind the desks collecting cat hair. This morning after my 2nd cup of strong coffee, I got busy cleaning everything off the desks while txrad ran the vacuum. It is amazing the amount of cat hair which collects under and around the desks. 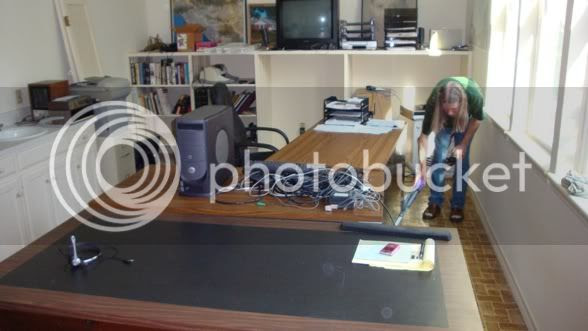 And cat hair gets in the keyboards as well. 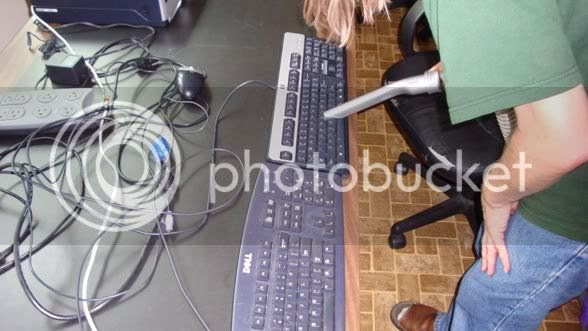 I took a lot of things out of this room in the process of cleaning up. There was so much stuff at the back of the room I didn't like going back there. There was a small cheap table I've had for years which I thought about tossing. And then I realized it would fit under the table between our desks and we can keep the modem, router, and surge protector off the floor. Less wires and equipment on the floor is a good thing! 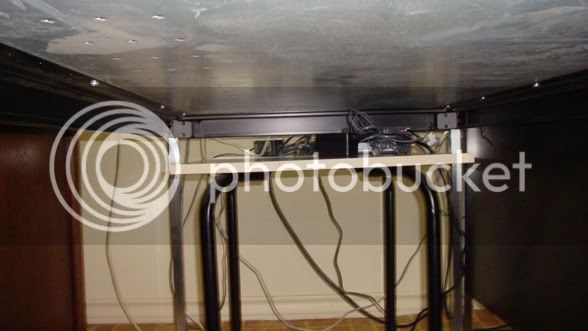 Now I can actually walk behind there without tripping over too many tangled wires and it'll be easier to vacuum back there. 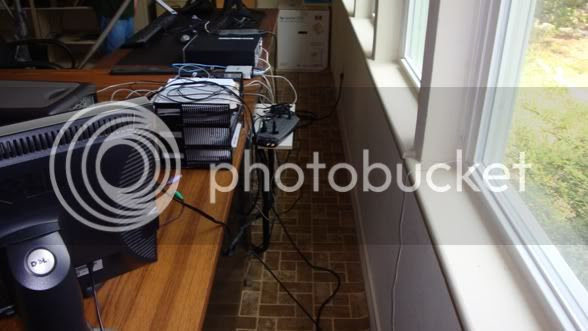 Now brace yourselves for the new office arrangement! We moved my desk to the back of the room facing the windows instead of facing txrad, and his desk is at the front. I like this much better because it gives me access to the shelves at the back. And please notice what I did with the awkward file cabinet which was in the first photo, as well as another one which had been against a wall. They both fit nicely into that shelf space which had been just a place to put boxes and junk.

Much better! And I have easy access to both. And although you can't see it well in this photo, that little gadget you see on the board just to the right of the file cabinet is my cordless phone which I mounted to that support panel this morning. It's just the charger cradle which is mounted. I can pick up the phone and move about the house. And the charger stays off my desk.

Next on my agenda is to remove the remaining clutter from that shelf on the back wall. 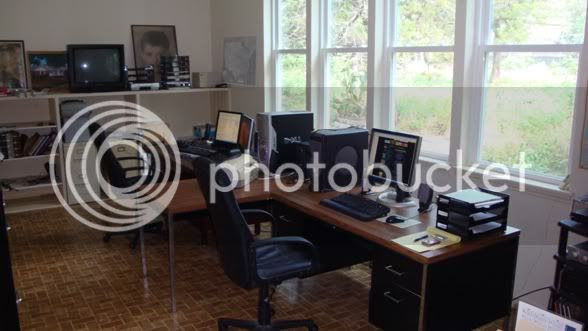 Here's a view from the back of the room of my space. Such a photo would have been impossible earlier this morning with all that junk back there. This actually makes me eager to start work in the morning. 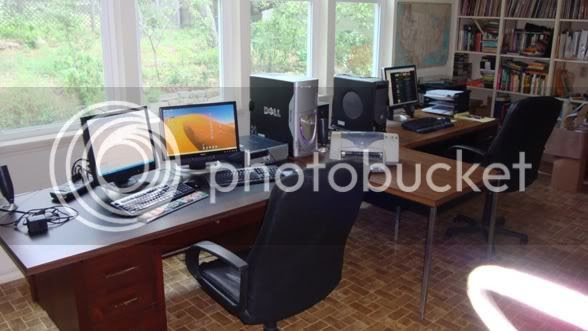 Working on the left. Blogging on the right. Now, what am I going to do with all the junk I moved out of the office into the den?
Post Author: Friðvin at 12:22 PM