We Are Wall Street Hostages

I feel like Wall Street is a force unto itself, not necessarily with the interests of the United States at heart. Why on earth would I feel like they are trying to make the rest of us feel like their guns are pointed directly at the back of our heads? 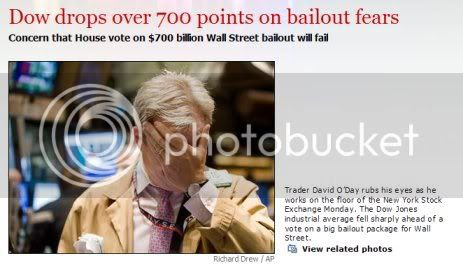 The House vote defeating the bailout proposal was 228 to 205.

Another Texas Republican, John Culberson, spoke scathingly about the unbridled power he said the bill would hand over to the Treasury secretary, Henry M. Paulson Jr., whom he called “King Henry.”

A third Texan, Lloyd Doggett, a Democrat, said the negotiators had “never seriously considered any alternative” to the administration’s plan, and had only barely modified what they were given. He criticized the plan for handing over sweeping new powers to an administration that he said was to blame for allowing the crisis to develop in the first place.