Lubna Hussein was spared a whipping in Sudan for having the audacity to wear this attire. She still faces a $200 fine or jail for the "indecency" of wearing slacks in public. 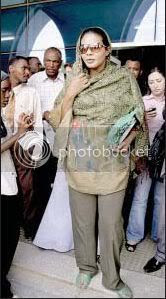 On Monday night, after refusing her lawyers’ advice to pay, Mrs. Hussein was whisked off to jail, though her lawyers said that in the coming days a committee formed for her defense might pay the fine and free her.

Sudan is partly governed by Islamic law, which calls for women to dress modestly. But the law is vague. According to Article 152 of Sudan’s penal code, anyone “who commits an indecent act which violates public morality or wears indecent clothing” can be fined and lashed up to 40 times.