This comes from my brother, a lifelong resident of Arkansas. And suffice it to say, he's not what you'd call a fan of George W. Bush or Republicans in general. 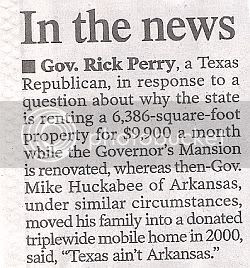 Tell your Texas Governor to go FUCK HIMSELF!"