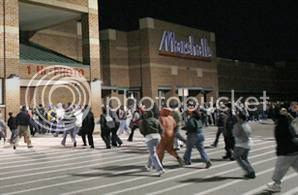 Let's get the latest out there in the Black Friday Frenzy. From Hooterville to Bug Tussle, folks are buying anything they can get their hands on as long as it's discounted and perceived to be a bargain worth staying up all night for.

In a scene replayed again and again at stores nationwide, about 200 people stood in line outside a Target in Columbia, S.C., at 5 a.m., an hour before the store was to open.

Tracy Jenkinson, 34, arrived just after 3 a.m. to take the first spot in line.

He planned to buy a $199, 19-inch LCD television for his daughters.

"If they were selling it, we were buying it," Tom Shea, 23, said as he surveyed his purchases at a midtown Manhattan Best Buy store. He said he, some friends and a cousin were the first through the doors when the store opened at 4 a.m.

Good for you, Mr. Shea. Knock yourself out. At 4 a.m. I was all warm and cozy under my down comforter which I probably ordered off the internet. Waaaayy easier.

At a Toys "R" Us store in Cherry Hill, N.J., the Torres family from Camden came for Microsoft Zune MP3 players, which were selling for less than half the usual $200.

They secured their spot in line at 1:30 a.m., then sent some family members to Kohl's to pick up toys, watches, a portable DVD player and a griddle in a frenzied 4 a.m. shopping spree that they said took all of six minutes.

My God! Speed shopping perfected! The People's Republic of China must be loving this.

Come one, let's all join hands and salute the flag of the country to which we have enslaved ourselves: