Although I find it hard to believe, I'm sure there are still a few people out there who feel a Sarah Palin vice presidency (or presidency) would be a triumphant moment for women and the feminist movement. Surely those numbers are dwindling as rapidly as my 401k value.

It was obvious McCain selected her as his running mate in order to appeal to women. As with so many other McCain strategies, what we see happening is the polar opposite. Sarah Palin has achieved cult status among the real he-men. The ones who ooze testosterone. 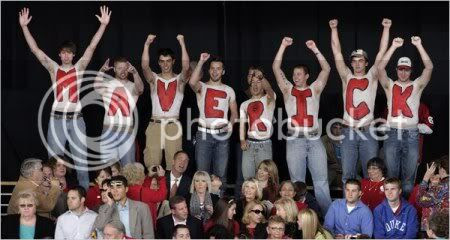 It is not unusual for fans of Sarah Palin to shout out to the Alaska governor in the midst of her stump speeches. It is noteworthy, however, that the crowds are heavily male.

At the height of Palinmania, soon after she made her national debut in September, Ms. Palin’s popularity among men was striking. Her favorability ratings were higher among men than women (44 percent to 36 percent), according to a New York Times poll, even though she was chosen in part because of her expected appeal to women.

I will now bombard you with excerpts from the rallies as reported in today's New York Times.

“Katie Couric and Tina Fey are going to do their thing, but it doesn’t bother me at all,” said Rob McLain, an insurance agent from Avon, Ind., who attended a packed Palin rally at an amphitheatre in Indiana on Friday night. Mr. McLain wore a “Proud to be voting for a hot chick” button and was joined by his wife, Shannan (“Read my lipstick” button on lapel), and his 6-week-old son, Jaxon (“Nobama” button on beanie).

“This is not a ladies campaign,” declared Linda Teegan at a rally in Weirs Beach, N.H., on Wednesday. She was taking a crowd snapshot. “There seem to be lots and lots of guys here,” she said. “I’d guess 70-30, maybe 65-35, men to women. It’s quite noticeable to me.”

“You tell ’em baby,” a man yelled out at a rally Wednesday night on a high school football field in Salem, N.H.

Her recent events drew scruffy high-schoolers in backward baseball caps, tank-topped bikers in bandanas and long-bearded veterans in berets. They crashed the rope line for photos and autographs. “Marry me, Sarah,” a man implored in Weirs Beach, N.H.

“She’s beautiful,” said a man wearing a John Deere T-shirt in Weirs Beach. “I came here to look at her,” he said, and his admiration for Ms. Palin’s appearance became more and more animated. Sheepish over his ogling, he declined to give his real name (“Just call me ‘John Deere’ ”).

“They bear us children, they risk their lives to give us birth, so maybe it’s time we let a woman lead us,” said Larry Hawkins, a former truck driver attending a rally late Thursday at Elon University in North Carolina. Mr. Hawkins said he would rather vote for Ms. Palin than for “McCain and Obama combined.”

Men have done plenty to mess up the country, he said. “The sexual drives and big egos of male leaders have gotten in the way of politics in this country.” Mr. Hawkins said he talked to fellow truckers, and a lot of them feel the same way. “They think it’s time for a woman, too,” he said. “This one. Palin is our kind of woman.”

Right. So here we have a bunch of men with strong sex drives and a sordid fetish for a woman offering up more of the same tired crap, saying she's just what we need to fix the mistakes of male leaders.

It was not so long ago when these same people were highly critical of Obama's cult following and celebrity status.

“You guys are great,” [Palin] said while signing autographs.

By the way, these politicians work for us. They are not here to entertain us. Signing autographs while interviewing for a job is not professional. That applies to all the candidates. It is infuriating.
Post Author: Friðvin at 9:45 AM