Like we aren't dealing with enough stress and turmoil already, the idiots are coming out en masse as if Barack Obama stuck his devil's pitchfork in a racist ant-hill.

Hays County, where that vandalism occurred, is just a few miles from my house.

A friend on mine in Dallas had a window shot out of her house awhile back. I'm sure the Obama for President sign in her yard had something to do with it. Some Obama signs are just being set on fire which is preferable to having a bullet entering your home... unless your area is extremely dry.

I would like to say my country is making me feel dirty right now, but Sarah Palin would cast me as un-American for saying it.

What a sad moment in our nation when scum of the earth resort to violence and intimidation to control the outcome of the most important election in my lifetime. And how ridiculous that I, and countless others I'm sure, are afraid to show our support for the man who will be leading this nation in 2009, barring some unlikely faux pas on Obama's part, or worse.

But I will put here on this blog what I will not affix to my car or display in front of my house because, quite honestly, I like my new windows and I've spent enough on car repairs this year. 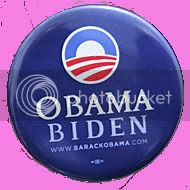 Here's how elections work in America. We get to individually choose who we feel is best able to lead the nation. It's called a basic right. You may not agree with my choice, and I may think you are a whackjob for supporting someone else. And that's where the disagreement needs to stop.

The idea that grown adults are resorting to tactics ranging from the theft of signs to extreme acts of violence based on their ignorance and insane fear is mind-boggling.
Post Author: Friðvin at 3:28 PM