Don't you hate it when you remember posting a comment somewhere a few weeks afterwards and for some odd reason you want to find it? As with any lost item, it's hardly ever where you think you left it, and often it turns up where you least expect to find it. I just got lucky.

Back on Friday, July 6, at 7:54pm, while intoxicated with the holy spirit, I posted this comment in the Virtual Pub over at Shakesville:

What are those lakes in Africa?

It was followed one minute later by this:

Quaker Dave,
you readin' this?

The reason I distinctly remember this is because Quaker Dave is deeply involved with the Darfur crisis and until recently (as you'll see from the link) maintained a blog devoted to covering Darfur.

There's rarely any good news coming from that region, but the discovery of one underground lake at least provides some new hope. 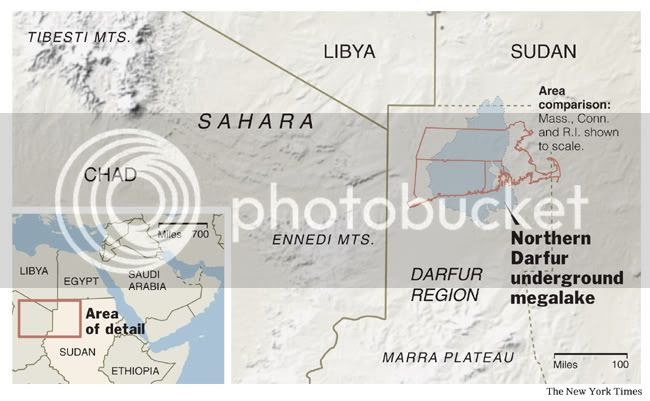 Unfortunately, as the New York Times article suggests, this may or may not be good news.

“Like all resources water can be used for good or ill,” said Alex de Waal, a scholar who has studied the impact of climate variation in Sudan and who witnessed the 1984-85 famine that is often cited as the beginning of the ecological crisis gripping Darfur. “It can be a blessing or also a curse. If the government acts true to form and tries to create some sort of oasis in the desert and control who settles there, that would simply be an extension of the crisis, not a solution.”